Too much TV time may hurt your heart 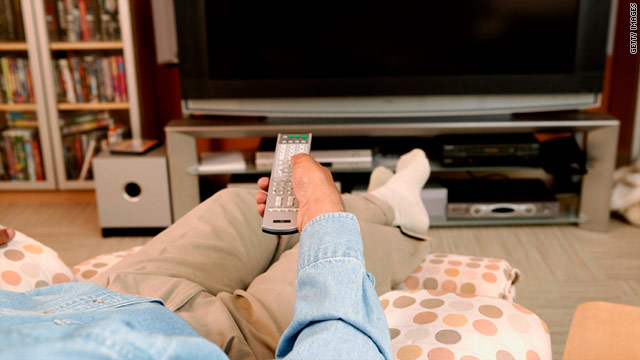 "We have taken sitting as a default position for many, many things," an expert says.
STORY HIGHLIGHTS
RELATED TOPICS

(Health.com) -- Spending lots of free time glued to the TV or computer screen can hurt your heart and shorten your life, no matter how much exercise you get when you're not riding the couch, a new study suggests.

People who spent at least four hours per day watching TV, playing video games, or using a computer for fun were more than twice as likely as those who kept their recreational "screen time" under two hours to experience a heart attack, stroke, or other serious cardiovascular problem, the study found. Couch potatoes were also about 50 percent more likely to die of any cause during the four-year study.

The link between screen time and heart problems barely changed when the researchers factored in the amount of moderate-to-vigorous exercise the study participants did, suggesting that the health benefits of exercise don't cancel out all that time in front of the tube or computer. (The researchers also controlled for obesity, smoking, diabetes, social class, and other factors.)

The study doesn't prove that watching TV or playing computer games is inherently unhealthy, says the lead researcher, Emmanuel Stamatakis, Ph.D., an epidemiologist at University College London, in the U.K. The real culprit may be what people tend to do during those activities: sit.

Why is sitting harmful? It's not entirely clear, but animal studies have shown that prolonged sitting slows down the action of an enzyme (lipoprotein lipase) that breaks down fats in the blood, such as cholesterol and triglycerides. When the enzyme activity slows, levels of those substances climb. This is a "very plausible explanation" for the findings, Stamatakis says.

The study, which appears in the January 18 issue of the Journal of the American College of Cardiology, adds to a growing body of evidence that "prolonged sitting is bad for health," says Barry Braun, Ph.D., director of the Energy Metabolism Laboratory at the University of Massachusetts Amherst.

"Too much sitting is not the same thing as too little exercise," says Braun, who studies the effects of exercise and inactivity on the body but was not involved in the new research. "Public health recommendations that have primarily focused on adding physical activity also need to urge subtracting time spent sitting."

Stamatakis and his colleagues followed more than 4,500 Scottish people age 35 or older whose screen time and other health behaviors were recorded in a survey. The majority of participants (54 percent) said they spent two to four hours of free time each day in front of the TV or the computer, while 29 percent spent four hours or more. (Screen time at work or school was excluded.)

Changes in the body caused by sitting may not be the only factor at work. Studies have shown that people eat more unhealthy snacks while they watch TV and are more likely to be exposed to ads for junk food. "My intuition tells me that it's more likely that it's sitting, but we don't have hard evidence yet to support either of the two explanations," Stamatakis says.

Although the researchers weren't able to confirm the lipoprotein lipase theory, blood samples from the study participants suggest that the relationship between screen time and heart problems is partly explained by unhealthy cholesterol levels and inflammation. Being overweight also appears to play a role.

Stamatakis and his colleagues are now investigating whether getting up and walking around or even just standing can help counter the ill effects of sitting. The average adult in the U.S. and U.K. watches three to four hours of TV daily, Stamatakis says, and many of us also spend our working lives sitting at a desk and commuting behind the wheel of a car.

"We have taken sitting as a default position for many, many things," he says. "I don't think that our bodies are made for this, and the reaction to this is all these adverse physiological and chemical consequences."