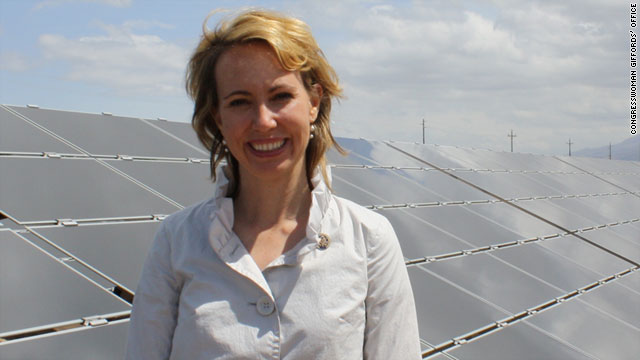 (CNN) -- After surviving a gunshot wound to the head at political event Saturday, Rep. Gabrielle Giffords remains in critical condition, and Tuesday was seen as significant in her recovery.

The brain tends to swell the most on the third day after a traumatic injury, and it's a very good sign if she makes it past the third and fourth day, said Dr. Keith Black, chairman of the Cedars-Sinai Hospital Department of Neurosurgery in Los Angeles, who is not involved in treating Giffords.

She has a breathing tube but is generating her own breaths, said Dr Michael Lemole, chief of neurosurgery at University Medical Centre in Tucson, Arizona, at a news conference Tuesday. Doctors say she has been responsive to commands.

"It's simply asking her to raise fingers, to squeeze on their fingers. It's not at a point yet where they can ask her to talk, because she's still on a respirator. But the signs that she is conscious are manifesting and we're very excited," Mike McNulty, Giffords' campaign chairman and close friend, told CNN's John King Monday.

Gunshot wounds to the head are fatal in more than 90 percent of cases, and many patients die before arriving at a hospital according to neurosurgery experts at the University of California, Los Angeles. People who live through it make up only 10 percent of traumatic brain injury survivors.

About 1.7 million people experience a traumatic brain injury each year; of them, 52,000 die, according to the Centers for Disease Control and Prevention. Women are less likely than men to suffer them. About 80 percent of patients with traumatic brain injuries receive treatment and are released from an emergency department.

ABC News anchor Bob Woodruff, who nearly died five years ago from an IED explosion in Iraq, is such a survivor. He wrote Monday that in a way Giffords' case seemed more hopeful than his own, because she has responded to simple commands at a stage when he did not, and interventions have improved even since his injury.

"Medicine has never been so advanced as it is today. If I was hit five years earlier I really don't believe I would have survived. I know in my heart that she will recover as well," Woodruff wrote.

"Still it takes so much longer to regain what we once had. There is no medicine or science or facts that can prove the power of the family. I was surrounded by my wife, parents, children and friends and that made this trip much faster."

James Brady, who was President Ronald Reagan's press secretary, suffered a brain injury during an assassination attempt on Reagan in 1981. He is partially paralyzed, and has impairments in speech and memory.

"The brain is just as treatable as any other organ in the body; it's just that yes, it's a lot more delicate," said Dr. Stephan Mayer, director of the Neurological Intensive Care Unit at Columbia University Medical Center, who was not involved in Giffords' care.

The wars in Iraq and Afghanistan have actually helped U.S. surgeons advance their techniques in treating traumatic brain injuries, Mayer said. Brain injury is the signature of modern warfare, and surgeons faced with a plethora of patients from missiles, blasts and explosions have developed a better understanding of how to help the brain heal.

Dr. Peter Rhee, Giffords' surgeon at University Medical Center in Tucson, told the Los Angeles Times his years of experience doing battlefield casualty care in the Navy prepared him for situations like treating Giffords and other victims of Saturday's shooting. But it also put things in perspective: "when we have a mass casualty of 11 people here, it's really not as bad as it can get," he told the Times.

The craniectomy, the procedure that Giffords underwent, which involves removing portions of the skull to allow the injured brain room to swell, is one of those advances that had success in Baghdad, and has subsequently become more common in the U.S., Mayer said. U.S. doctors feared this procedure would leave patients as vegetables, or with a lifetime of misery and suffering. They didn't understand the point of leaving the skull bone off. But the brain is "more resilient and plastic than we thought," Mayer said.

Neurosurgeons distinguish between "penetrating" injuries, such as bullets that go through the brain, and "blunt" injuries, which refer the trauma of hitting one's head against an object or the floor, for example. A bullet also creates a focused wound to the brain, concentrated in one area, while a concussion or other blunt injury creates more diffuse harm, said Dr. M. Sean Grady, chief of neurosurgery at the University of Pennsylvania School of Medicine, who was not involved in Giffords' care.

Because it's easier to know which tissue is damaged, a focused wound can be better from the surgeon's point of view, Grady said. However, in some cases, the blast wave of a bullet can spread through brain tissue, impacting multiple areas.

Both of these forms of brain injury have significant neurological consequences, and can cause spinal fluid leaks and infection, Grady said.

"It's a little bit like Humpty Dumpty, we're not able to put brains back together again," Grady said. Still, "the brain is capable of remarkable recovery," he said.

In Giffords' case, the bullet entered and exited only the left hemisphere of the brain, and she can follow simple commands. If Giffords was lucky enough to not have certain areas critically damaged, she has a good chance to make a substantial recovery, Grady said.

The first week or two is considered the acute and critical care stage, Grady said. After that, the degree and duration of recovery depends on how much tissue was damaged, and what the consequence of that damage is. Knowing the extent of impairment is impossible before Giffords wakes up, he said.

Recovery will take several months, and even up to one-and-half years, experts say.