Mike Potnis and his wife, Rupal, struggled with whether to vaccinate their son Aditya.
STORY HIGHLIGHTS

(CNN) -- The controversy over the existence of a link between autism and vaccines is not likely to end, even after the only study to imply such a link has been discredited, retracted and called an "elaborate fraud."

A scathing report published Wednesday by the British Medical Journal stated that Dr. Andrew Wakefield, the lead author, falsified the medical histories of all 12 patients in his study and that he was "hoping to sue vaccine manufacturers and to create a vaccine scare."

Wakefield's study cast doubt about the safety of vaccines for many parents. Several families dealing with autism today expressed dismay and anger that such questionable research caused so much confusion and distress.

"To put parents through something like this is downright criminal," said Mike Potnis, who many years ago had questioned whether there was a link between autism and vaccines.

When Potnis and his wife found out about his son's autism, "we went through ups and downs about whether we should give him subsequent vaccinations. We struggled with it in a major way."

"Being parents, whatever your educational level, whatever your intelligence, you're emotionally in love with the child. In spite of all the ways you think logically, when it comes to your child, all that logic goes out of the door. Sometimes you are swayed by emotions, by what people preach."

Although his wife is a doctor, the couple felt conflicted as they faced the scientific evidence and remembered how their son, Aditya, cried so much after getting a pertussis vaccine. The couple from Glenview, Illinois, eventually had Aditya fully immunized.

But the latest news may have little effect on those who blame vaccines for their children's conditions. Supporters of the discredited theory echoed Wakefield's assertion that he is a target of a "ruthless, pragmatic attempt" to crush vaccine safety concerns.

"Unfortunately, his core group of supporters is not going to let the facts dissuade their beliefs that [the measles, mumps and rubella vaccine] causes autism," said Dr. Max Wiznitzer, a pediatric neurologist at Rainbow Babies & Children's Hospital in Cleveland. "They need to be open-minded and examine the information as everybody else."

With the latest news, Dr. Paul Offit, chief of the Division of Infectious Diseases at the Children's Hospital of Philadelphia and a vocal critic of the anti-vaccine movement, said: "The war has been won, but there are residual damages. ... It's hard to un-scare people. It's very easy to scare them, but hard to reassure them."

Wakefield's paper panicked parents and led to a sharp drop in the number of children in the United Kingdom getting the measles, mumps and rubella vaccine.

A 2009 survey of U.S. parents published in the journal Pediatrics showed that while most agreed that vaccines protect their children from diseases, more than half were concerned about adverse effects. A quarter of the1,552 respondents said vaccines cause autism in healthy children, and about 12 percent of the parents refused at least one recommended vaccine.

While many parents remained firm on their convictions, Bryan Glenn was one iReport contributor who had second thoughts.

Glenn believed there was a link because his stepson Justin, who has autism, exhibited behavioral changes after his childhood vaccinations. The recent controversy gave him pause, as did the reality that autism appears to still be on the rise despite some parents choosing not to vaccinate their kids.

With vaccine-preventable diseases such as whooping cough cropping up again, Glenn said he was "seriously considering revising" his opinion.

In contrast, Keri Elwell of Vero Beach, Florida, was unwavering in her support for Wakefield and said the doctor was unfairly targeted.

"Putting Dr. Wakefield over the coals once again is not helping anything, and it's not proving anything," she said.

While she is not opposed to vaccines, Elwell said she supports a safer program because she believes some children are genetically predisposed to autism and cannot handle the recommended vaccination schedule.

Elwell has decided her 12-year-old daughter will not be get any more vaccines, and she said she was willing to risk a vaccine-preventable disease such as measles.

"My kid is not collateral damage, and that's what it feels like. It feels like she took one for the team," she said. "It is not a blanket decision to vaccinate children, when all children are different." 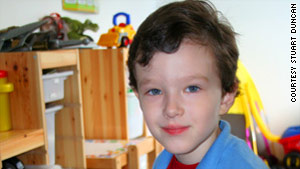 Cameron Duncan, who has autism, is the subject of his father's blog.

Stuart Duncan, a father who blogs about his son's autism, said he understands why many cling to the discredited hypothesis, although no other research has reproduced Wakefield's results.

"I feel bad for the parents who for a while have a normal child, who hugs and speaks and then shortly after they turn 2, they lose all words and no longer look them in the eye. I would look for someone to blame too. If they had just gotten vaccines, I would be pretty angry too.

"No news story is going to convince them of anything. When you have that much anger and frustration, it's passion. They're fighting for their children."

But it can be a long and daunting fight for such families. Many struggle to find educational classes, affordable therapies and health resources to help their children. And adults with autism have trouble finding jobs, housing or a support system that understands their condition.

The vaccine issue has torn up the autism community and diverted money, research and efforts, Duncan said.

"How much time has been spent with us fighting?" he asked.