SAD: When seasons change how you feel 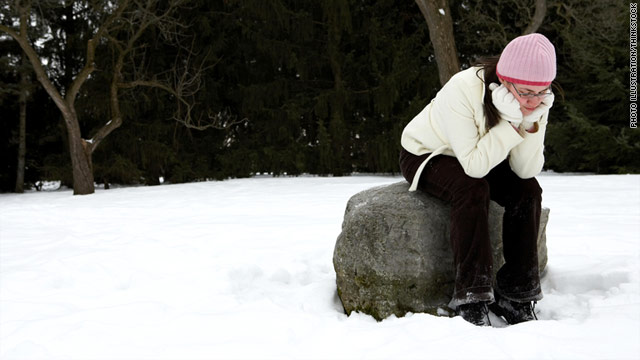 (CNN) -- By 10 a.m. every day during the winters, Rachelle Strauss felt like she could go back to bed. She used to be a morning person, but that all changed about 10 years ago when she started to feel exhausted as the darkest days dragged on.

"As soon as March came 'round and we hit spring, I was back to my bouncy self. It's almost like being two people for two different seasons of the year," said Strauss, 38, of Gloucestershire, England.

Strauss is not alone. In Northern Europe, an estimated 12 million people suffer from seasonal affective disorder. Over here in the United States, about 4% to 6% of the population may have it, but 10% to 20% might have milder winter blues, according to the Cleveland Clinic.

The condition tends to strike mainly women in their 20s, 30s and 40s, although men can also have it. Children and adolescents may also develop it, and it is less common in adults of older ages.

Seasonal affective disorder can be expected in regions of the world that are farther away from the equator and thus experience seasonal changes in daylight hours more dramatically, said Simon Rego, psychologist at Albert Einstein College of Medicine and Montefiore Medical Center in the Bronx, New York.

Scientists aren't sure why some people get seasonal affective disorder and others don't. One theory is that sufferers may have a biological predisposition to it, and the symptoms get triggered in particular ways.

For Strauss, the symptoms of lack of energy and depression formed a vicious cycle, where she wouldn't exercise or socialize, and then became irritable and cranky.

"I got depressed because I couldn't do the things I wanted to do," she said. "Certainly this total exhaustion is very debilitating after awhile."

Alison Kero of Denver, Colorado, can relate. Before moving from New York, her energy dropped off in the winter, and she would go to sleep at 6 p.m.

If you have SAD, you're hibernating

A hallmark of the condition is that symptoms get worse when daylight saving time ends. If you're feeling down fairly consistently for two weeks or more, and the feelings recur during the same time every year, there's reason to suspect that it's seasonal affective disorder, she said.

When it's not necessarily SAD

For the patients whose moods suffer in the summertime, there may be longstanding issues contributing to the problem, such as bad childhood memories of staying at home when school let out, Latz said.

"If we came to dread a certain time of the year every year as kids because of our family dynamics or the environment that we were in, then we can carry that into this subconscious dread of that time of the year," she said.

Personal experiences are a major component of how the seasons can influence how you feel, said Dr. John Sharp, author of "The Emotional Calendar." Anyone, regardless of whether they have seasonal affective disorder, may get into particular moods because of environmental, psychological and cultural forces that occur at various times of the year.

If you once had an amazing experience one year in the early part of December, you'll likely feel positively when seasonal changes such as snow, crackling fireplaces and hot chocolate bring back those good memories.

The anniversary of a major loss, on the other hand, can throw a dark cloud over any time of year. Sharp noted that Mark Madoff, son of convicted Ponzi-schemer Bernie Madoff, took his own life on December 10, the two-year anniversary of his father's arrest.

Cultural norms can also drive seasonal changes in mood, he said. It has been documented that there are peaks in suicides in the spring. The reason for that has not been pinned down.

Sharp posits that as the days get longer, many people tend to appear more active and carefree, which makes sufferers of depression feel worse. The cultural experiences of the winter holidays can also be a burden for adults, with the stress of family gatherings, whereas for children they were times of joy.

What are the treatments?

Light therapy imitates light from the outdoors and triggers changes in the brain that can help elevate mood. It doesn't work for everyone, but many people such as Strauss have found relief from sitting in front of a bright light box. Strauss uses hers during breakfast, and it helps her get through the day. There are also dawn simulators, which mimic the sunrise as you wake up, and light visors that look like baseball caps that you can wear to get light exposure.

Since moving to Denver, which tends to see more sun than New York, Kero feels like she doesn't have to use her light box anymore, but 15 to 30 minutes a day did help her back East.

"It's a deep biological reality that our brains sense the amount of sunlight we're exposed to with great sensitivity. It adds up to become a big drain when we don't have enough light," Sharp said.

But light therapy doesn't work for everyone.

Some people need medications that depression patients would receive: anti-depressants called selective serotonin reuptake inhibitors. Anxiety, suicidal thoughts and poor concentration because of excessive worry are all signs that there could be an issue with serotonin, a brain chemical involved in mood, Latz said.

Lack of energy is a sign of a problem with the brain's levels of dopamine, another brain chemical, she said. Exercise can help stimulate this system and help you feel more awake.

In mild cases, certain nutrients and herbs may help. Omega-3 fatty acids have been shown to relieve some symptoms of anxiety, Latz said, which are found in oily fish. The American College of Physicians considers St. John's wort an option for mild depression, but be aware it can interact with many drugs and might cause oversensitivity to light. Strauss, whose website Little Green Blog discusses natural remedies, recommends uplifting essential oils such as lavender. Kero suggests surrounding yourself with positive people.

And if there are issues you're having besides the weather, try talking to a mental health professional. Cognitive behavioral therapy is one form of talk therapy that can help you confront negative thought patterns.

"Obviously if there's something to talk about, if you're having frustrations with some aspect of life, counseling is quite good as a potential way forward," Sharp said.

Seek help if you're entertaining suicidal thoughts and feeling like life isn't worth living. Call the National Suicide Hotline at 1-800-784-2433 if you need immediate assistance.