Judge: Anthony must pay nearly $98,000 for probe of dead daughter 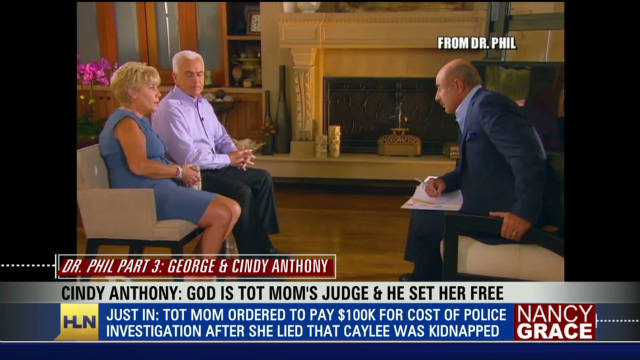 (CNN) -- Casey Anthony owes authorities just under $98,000 for the costs of investigating the disappearance of her 2-year-old daughter, Caylee, in 2008, a Florida judge ruled Thursday.

The decision means prosecutors are set to recoup less than one-fifth of the more than $516,000 that they had sought. The state had argued that if it were not for the 25-year-old Orlando woman's lies, investigators wouldn't have had to expend the time and money to find her daughter's body.

They searched for five months, eventually finding Caylee's skeletal remains in woods less than a mile from her grandparents' Orlando home.

Orange County Superior Court Chief Judge Belvin Perry Jr. found Anthony is liable for expenses incurred from July 15, 2008, when Caylee was reported missing, to September 29 of that year, when authorities ended their missing-person case and opened a homicide investigation.

But she was not ordered to pay back investigative costs -- as the state had requested -- incurred between September 30 and December 19, 2008. The latter is the date when Caylee's remains were positively identified, eight days after they were found.

While it doesn't agree fully with the ruling, the Orange County state attorney's office does not plan any more action to try to recoup money from Anthony, spokesman Randy Means said.

"We're disappointed that our theory wasn't substantiated by the judge, but we will live with the results of the ruling," Means added. "We're pleased ... that some of the money will be returned to the taxpayers. Unfortunately, it wasn't anywhere close to what the state agencies thought they were due."

A jury acquitted Anthony in July on murder and other charges related to her daughter's death. At the same time, she was convicted on three lesser charges of misleading authorities in the case.

Anthony's attorneys admitted she lied to authorities during the search for her daughter, saying she knew the girl was dead. Her attorneys have claimed that young Caylee died accidentally.

There was no immediate reaction to the ruling from Anthony's camp. But at a hearing earlier this month, one of her lawyers, J. Cheney Mason, characterized the effort to make his client pay as unfair, given her acquittal on the most serious charge of murder.

"What about the justice for the defense that we won?" Mason said, contending the prosecution wanted reimbursement for crimes that had nothing to do with those for which Anthony was convicted.

In his ruling Thursday, Perry granted $61,505.12 to the Florida Department of Law Enforcement for "costs ... reasonably related to the investigative work provided as a result of (Anthony) providing false information as to the location of her daughter, Caylee Anthony, and making other false misrepresentations."

For the same reasons, $10,283.90 will go toward the Metropolitan Surveillance Bureau "for electronic surveillance costs from July 22, 2008, through September 29, 2008," the judge determined.

And the Orange County Sheriff's Office is to be reimbursed $25,837.96 for its costs during that time. But that figure could rise.

Perry stated that some expense reports from that office "were not adequately broken down in order to determine the work performed (between) July 15, 2008, through September 29, 2008." He requested that 30 individuals submit revised reports by September 19, after which he could order Anthony to pay back more.

Perry denied requests from the state attorney's office for reimbursement of its costs, beyond $50 "for the costs of prosecution of the (three) misdemeanor convictions."