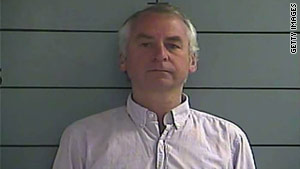 Paul Douglas Peters is accused of placing a fake bomb around a girl's neck and trying to extort money.
STORY HIGHLIGHTS
RELATED TOPICS

(CNN) -- A man accused of strapping a fake bomb around an 18-year-old Australian girl's neck in an attempt to extort money from her family is scheduled to appear at an extradition hearing Wednesday afternoon, prosecutors said.

A hearing has been scheduled to consider suspect Paul Douglas Peters' waiver of formal extradition, according to the U.S. attorney's office in the Western District in Kentucky.

Authorities say Peters attempted to extort money from Madeleine Pulver's family in suburban Sydney by fastening a black box around her neck.

In a note, he said the box contained "powerful new technology plastic explosives" that would go off if she did not follow his instructions, according to a complaint for provisional arrest filed in U.S. District Court in Louisville.

Those instructions included orders to write to an e-mail address and wait for details on handing over an unspecified amount of money.

Pulver spent nearly 10 agonizing hours in her bedroom as authorities tested the box to make sure it would not explode before removing it from her neck.

At the same time, authorities allege, Peters was stopping off in his four-wheel-drive Range Rover at a library and video store to check the e-mail account he'd given Pulver and whiling away at least part of the time at a liquor store browsing for wine.

Peters' attorney, Scott Cox, has said the investment banker and attorney will contest the charges.

"It is my understanding that he has no criminal history whatsoever," Cox said.

Investigators in Australia and the United States say they linked Peters to the e-mail address using video surveillance and access logs, and found credit card records showing that he had purchased a thumb drive, lanyard and baseball bat identical to those used in the extortion attempt, according to the complaint.

A magistrate in Kentucky ordered Peters, an Australian national, held without bail until at least October 14, when the original extradition hearing was set. The date was re-scheduled for Wednesday because of Peters' plan to waive extradition, according to prosecutors.

Australian police plan to seek charges including kidnapping, aggravated breaking and entering with intent to commit a serious indictable offense, and demanding property by force with intent to steal, according to the complaint.

Peters is not accused of any U.S. offenses.

According to the complaint, a man wearing a business shirt, slacks and a blue, yellow and white mask that covered everything but his mouth and a pair of "saggy and wrinkly" eyes sauntered into Pulver's room, carrying a backpack and a black aluminum baseball bat.

He said he wasn't going to hurt her, forced a black box around her neck using something like a bike chain and locked it. He attached a lanyard with a green thumb drive and a plastic document sleeve containing a note.

Pulver waited a few minutes, called out to the man but got no response. She contacted her parents and asked for police, and after nearly 10 hours, tests concluded that the device was not a bomb.

Peters is a globe-trotting investment banker who went to primary school in Hong Kong, attended college in Sydney, ran investments in Malaysia and spent time in the United States, where his ex-wife and three school-age children live, according to authorities and his attorney.