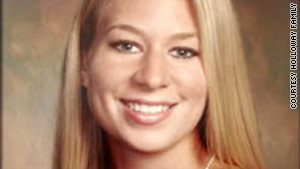 (CNN) -- The father of long-missing Alabama teenager Natalee Holloway has asked a court to declare her dead, a move the girl's mother says came as a surprise.

Holloway was last seen in May 2005 during a trip to the Caribbean resort island of Aruba. Her father, Dave Holloway, filed a petition for a death declaration in June, said Jackie Rhodes, the chief clerk for Jefferson County Probate Court.

In a written statement, Holloway's lawyer, Karen Hennecy, said her client "is seeking closure for his family."

"This is a normal proceeding for families when a loved one has been missing for an extended period of time," Hennecy said. "Alabama law requires a waiting period of five years when a body has not been recovered and no death certificate has been issued."

Natalee Holloway had just graduated from high school in the Birmingham suburb of Mountain Brook when she disappeared on a celebratory trip with classmates to Aruba. Her parents are divorced, and her mother, Beth Holloway, said she was unaware that her ex-husband had gone to court to seek a formal death declaration.

"I only learned about this when I was handed the citation by a process server while addressing a large audience at a conference in Georgia," Holloway said in a statement issued through her Natalee Holloway Resource Center, which aids families of missing persons. "I don't know what this is about, or why Dave is taking this action at this time."

Natalee Holloway's disappearance remains unsolved. A suspect, Joran van der Sloot, has not been charged in connection with the disappearance, but he was indicted on federal extortion charges in 2010 after prosecutors accused him of offering to sell information about the location of Holloway's remains in exchange for $250,000.

Van der Sloot is awaiting trial on murder charges in Peru in the death of a woman whose body was found in his hotel room in 2010. He faces a 30-year prison term if convicted, prosecutors said.

CNN's Martin Savidge and Vivian Kuo contributed to this report.