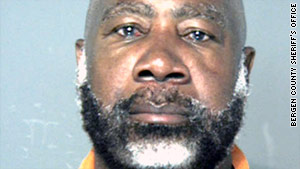 (CNN) -- In spite of heightened security due to a terror threat on the 10th anniversary of the September 11th, 2001, terrorist attacks, a South Carolina man was apparently able to sneak a stun gun into a professional football game and fired it into the crowd, police said Tuesday.

Leroy T. McKelvey, 59, allegedly used the gun on three men in an upperdeck scuffle at MetLife Stadium in East Rutherford, New Jersey, during a Sunday match-up between the New York Jets and Dallas Cowboys, according to New Jersey Police Sgt. Julian Castellanos.

He was taken to Bergen County Jail and later released on $22,500 bail. McKelvey could not immediately be reached for comment.

When asked about the security breach, National Football League spokesman Brian McCarthy said the league is "always refining and improving our security procedures."

"These procedures have been successful in keeping items that can cause serious injuries out of our stadiums," he said in a statement. "We will continue to be vigilant in protecting the safety of our fans."

Mark Lamping, the chief executive of MetLife Stadium, said the stun gun involved in the incident was the size of a small cell phone.

"Procedures for pat downs established by the NFL and used at every game were in effect at all entry gates," he said in a statement.

A video posted on YouTube apparently captures the immediate aftermath of the alleged attack, showing several Cowboys fans surrounding at least one person who is laying near the base of one of the stadium's seats.

CNN cannot independently confirm the authenticity of the video.