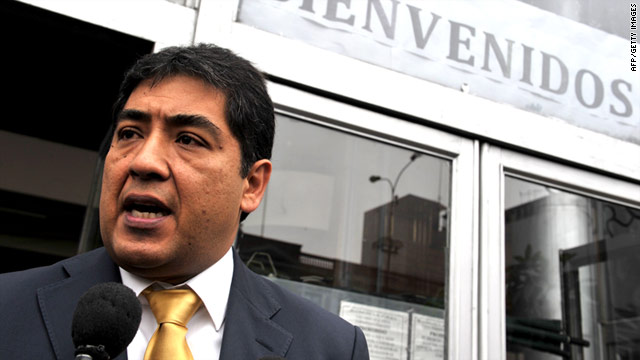 Edward Alvarez Yrala, the attorney for the family of Stephany Flores, speaks to the press after a court hearing on Monday.
STORY HIGHLIGHTS
RELATED TOPICS

(CNN) -- Joran van der Sloot is willing to confess to a "simple homicide" charge in relation to the May 2010 death of a woman in Peru, but not to more serious charges that would carry longer prison terms, his lawyer said Monday.

Meanwhile, the victim's family asked a three-judge panel for a more stringent charge that could have the 24-year-old Dutch national's indictment sent back to the prosecutor's office -- a move that could prompt a delay in his trial, if the court assents -- the Lima, Peru, Superior Court said Monday.

Both the accused and the victim's family disagree with the indictment proposed by prosecutor Miriam Riveros Castellares. She is asking the panel to indict Van der Sloot on charges of qualified murder and simple robbery, which carry 28-year and 2-year sentences. He would also make a restitution payment of $73,000 to the victim's family.

Attorney Luis Jiminez Navarro and his client, Van der Sloot, did not attend the hearing due to what Navarro described as the massive media interest in the case. But the lawyer did submit his response to a proposed indictment in writing, asking for a simple homicide charge that could carry a maximum sentence of 20 years in prison.

He said, too, that his client would confess to this charge.

But the attorney for the family of the victim, Stephany Flores, told the three judges that the prosecutor's proposed indictment against Van der Sloot had "mistakes," a news release from the court said.

It did not specify what mistakes Edward Alvarez Yrala referred to in his arguments.

According to Navarro, Yrala asked the court to charge Van der Sloot with a charge akin to aggravated murder, which carries a maximum sentence of life in prison.

The panel has 15 days to decide on Yrala's request for a new indictment. If a decision is made not to return the indictment to the prosecutor's office, a date will be set for Van der Sloot to stand trial on murder and theft charges, the court said.

Flores was found dead in Van der Sloot's hotel room in Lima last year. Police say Van der Sloot took money and bank cards from her wallet and fled to Chile, where he was arrested a few days later.

Three Peruvian drivers who allegedly helped Van der Sloot flee to Chile are also charged in the case. Prosecutors want five-year prison sentences for them and fines of about $1,800.

Before he resigned earlier this year as Van der Sloot's lawyer in the Peruvian case, Maximo Altez told In Session his client attacked Flores after she found something on his computer that tied him to Holloway. He gave In Session a copy of a motion he filed asking that Van der Sloot face a lesser charge for a crime of passion.

"My client ... admits having murdered the victim, but not with ferocity, for profit or pleasure, nor any of the other element(s) that make up this murder, but only by violent emotion that overtook him at the time he was attacked by the victim," the motion read.

Van der Sloot was arrested in June of last year in relation to Flores' death, but was not formally charged until this month.

Earlier this month, Flores' family urged prosecutors to file charges, warning that Van der Sloot could be released by December unless the case goes ahead. Under Peruvian law, if a suspect's trial doesn't begin within 18 months of his arrest, he is set free.