Lawyer: Weatherman found near corpse hopes to clear his name 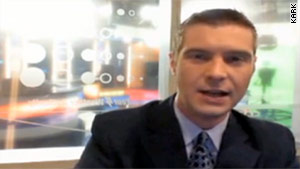 Brett Cummins resigned Friday from his position as a meteorologist at KARK in Little Rock, Arkansas.
STORY HIGHLIGHTS

(CNN) -- The Arkansas weatherman found last week in a hot tub alongside a man's lifeless, naked body is hoping autopsy results and other evidence will soon clear his name, his lawyer said Monday.

Mark Hampton said his client, Brett Cummins, resigned Friday from his position as a meteorologist at KARK, which is based in Little Rock.

"The station was getting continuing inquiries, and Brett thought it would be best if he resigned," Hampton said, adding that the resignation was done orally after his client contacted the station.

In a statement on its website, KARK confirmed that Cummins' tenure at the station ended Friday afternoon.

Authorities have not charged him, or anyone else, in the death of Dexter Paul Williams, 24.

Christopher Barbour, 36, said he awoke Monday morning in his home outside Little Rock to find Williams' body at the bottom of an empty tub, his face blue and purple and a chain around his neck, a Maumelle Police Department report said.

Cummins, 33, was asleep next to the corpse, whose head was lying behind the meteorologist's shoulder, Barbour told police, according to a report by Officer Gregory Roussie. The witness said he awakened Cummins, who screamed and ran to the living room, where he vomited next to the couch after noticing Williams' discolored face and cold skin.

The previous night, Williams and Cummins arrived together at Barbour's house, Barbour told police. Once there, the three had drunk alcohol and snorted illegal narcotics, though Barbour could not identify the drugs, according to the report.

Last week, Williams' family issued a statement through their lawyer Thomas Nichols that said, "Dex had a very loving but trusting heart. Anyone who knew him would agree that he was easily influenced."

Hampton had identified Williams as Cummins' friend, but on Monday the lawyer said that -- heeding his advice -- the weatherman had not contacted the dead man's family.

No arrests had been made, but an investigation is under way, Lt. Jim Hansard said last week. "We don't have a crime -- yet," he said. "That's part of the investigation."

Arkansas State Crime Laboratory Director Kermit Channell said Monday that Williams' autopsy examination "should be finished up," anticipating that a final report will be ready "in the next week or so." After that, it will up to the local law enforcement agency overseeing the case -- the Maumelle Police Department -- to decide whether the autopsy results will remain confidential or be released to the public, Channell said.