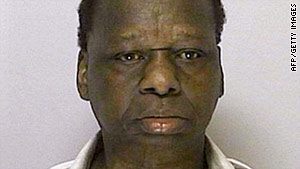 Onyango Obama was arrested on August 24 after failing a field sobriety test, according to police.
STORY HIGHLIGHTS

(CNN) -- An uncle of President Barack Obama who was arrested last month for allegedly operating a vehicle under the influence of alcohol has been released from custody.

Onyango Obama was freed from U.S. Immigration and Customs Enforcement custody on Thursday under an order of supervision, according to a statement Friday from Brian P. Hale, director of public affairs for ICE. He will be required to check in regularly with immigration authorities, Hale said.

An officer in an unmarked police cruiser stopped Obama after he failed to make a proper stop at an intersection, according to a statement from Framingham police.

The arresting officer, Val Krishtal, said Obama had red and glassy eyes, slurred speech and appeared unsteady on his feet, according to the statement. Obama told Krishtal he had consumed two beers, and then failed "several" field sobriety tests, the statement said.

Obama was arrested for operating a vehicle under the influence of alcohol, failure to yield and operating a motor vehicle to endanger, the statement said.

According to a a federal law enforcement source who spoke on condition of not being identified, Obama was not legally in the United States and previously has been ordered removed from the country.