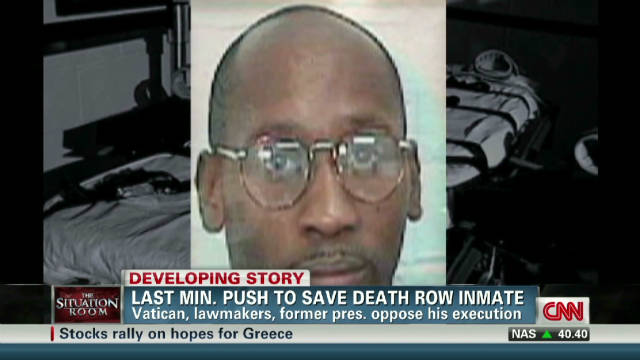 (CNN) -- The human rights group Amnesty International renewed its call for clemency Wednesday for a man on Georgia's death row, citing continued doubts about his guilt.

Davis "could very well be innocent," said Laura Moye, the head of Amnesty's Death Penalty Abolition Campaign. "It's difficult to believe that a system of justice could be so terribly flawed."

In March, the U.S. Supreme Court rejected Davis' request that his execution be delayed in order to gain more time to prove his "actual innocence."

Davis has gained international support for his long-standing claim he did not murder an off-duty Savannah police officer more than two decades ago. He was granted a stay of execution by the Supreme Court two hours before he was to be put to death in 2008, and the court in 2009 ordered the federal district court to take another look at the case.

That court, after holding a hearing to review evidence, ruled in August 2010 that Davis "failed to show actual innocence" in the case.

The controversial case of Troy Davis

Witnesses have said Davis, then 19, and two others were harassing a homeless man in a Burger King parking lot in 1989 when off-duty officer Mark MacPhail came to the man's assistance. They testified that Davis shot MacPhail twice and fled.

But upon reviewing Davis' claims of innocence, the U.S. District Court for the Southern District of Georgia found last year that Davis "vastly overstates the value of his evidence of innocence."

CNN's Bill Mears and Tom Watkins contributed to this report