Judge warns Conrad Murray to keep quiet about his rulings 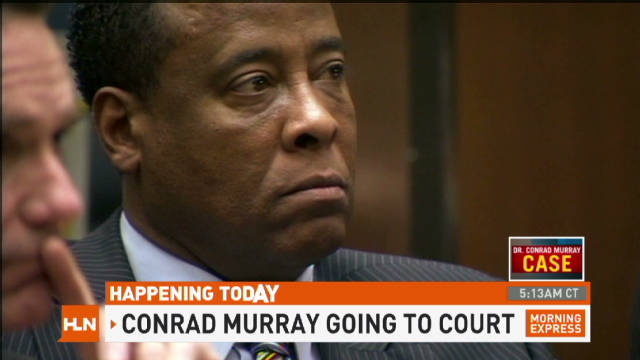 Los Angeles (CNN) -- The judge in the trial of the physician charged with causing Michael Jackson's death warned Dr. Conrad Murray and his lawyers on Tuesday to keep their mouths shut in public when they disagree with his rulings.

Los Angeles County Superior Court Judge Michael Pastor ended a hearing Tuesday saying he wanted "to make it crystal clear" he did not want to hear or read their criticisms in news reports.

Judge Pastor was apparently upset by Dr. Murray's response when a TMZ photographer approached him at an outdoor mall in Santa Monica, California, last month. The photographer, who followed Murray as he pushed his child in a stroller, asked what he thought of the judge's decision not to sequester jurors to shelter them from media coverage of the trial.

"I think it's an error, but we'll keep our faith and the Lord will see us through this," Murray said.

The defense is appealing Pastor's ruling, arguing that keeping the jury separated in a hotel for the duration of the trial is the only way to keep them from being influenced by TV commentators and online reporting.

Although Murray has not been required to attend pretrial hearings since May, Judge Pastor ordered him to be in court Tuesday. Murray listened as the judge said he wanted to "to admonish counsel and Dr. Murray" that the case would "be tried in this courtroom."

Still, there is no gag order legally preventing the defense team or Murray from talking to reporters about the trial. The judge did not indicate how he would enforce his admonition.

While the trial is set to be televised, cameras have not been allowed in pretrial hearings. Defense lawyers have sometimes stopped to talk to reporters outside of the courthouse after those hearings, but they've become notably silent in the past week.

Murray's lawyers filed an emergency petition with the California appeals court on Friday asking that the trial be delayed until Judge Pastor's decision not to sequester the jury can be reconsidered.

"Petitioner only asks that measures be put in place so that the jury is not poisoned by the mass of information and opinion that will be generated from the reporting," the defense argued in its petition.

Judge Pastor ruled last month that sequestration was not needed because he had faith jurors would follow his orders to avoid news reports and commentary about the case. Keeping the jury separated from the rest of the world during the trial would "make them feel like feel like inmates," Pastor said.

"This was, with all due respect, abuse of discretion," defense lawyers said in their 28-page petition.

They compared the upcoming trial to the recent coverage of the Casey Anthony murder trial and said Murray could not get a fair trial if the jury was not isolated.

"Because of the international notoriety of Mr. Jackson, it would be impossible for a juror to browse any news source on television or the Internet, without seeing a boldly printed headline discussing the trial."

Judge Pastor said Tuesday the "defense is justified in seeking appellate review," and he expects the appeals panel will expedite its consideration of the petition.

"But absent a mandate from the court of appeals staying the proceedings, we are on course," Pastor said.

The judge scheduled another hearing for Wednesday morning to deal with "any other issues that may be out there that we should be addressing before the commencement of voir dire" on Thursday.

It will also be the lawyers last chance to ask for any changes in the 30-page questionnaire that will be used to choose jurors. "It is an exhaustive questionnaire," Judge Pastor said.

Jury selection begins Thursday morning when the first of several hundred potential jurors are screened to determine which could withstand the financial and family hardship of sitting through the trial, which is expected to last five weeks.

Murray is charged with involuntary manslaughter in Jackson's death on June 25, 2009. The coroner ruled it was caused by an overdose of the surgical anesthetic propofol, combined with other drugs.

Opening statements are set for September 27.