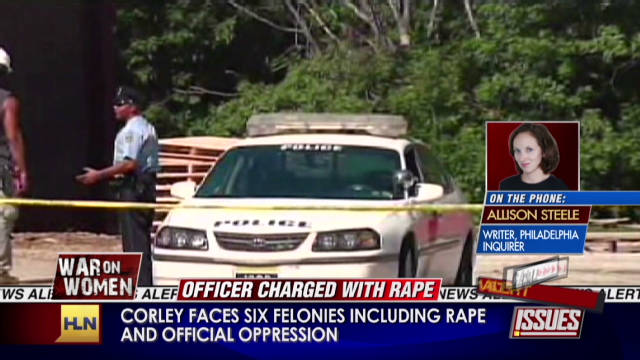 Philadelphia (CNN) -- A Philadelphia police officer was charged with rape Wednesday after allegedly assaulting a woman while on duty, according to the Philadelphia District Attorney's Office.

Police Officer Keith Corley II was arrested and charged with rape, indecent assault, sexual assault and other related offenses. Corley, 27, has been with the police department for four years, according to the district attorney's office.

According to CNN affiliate KYW, a 32-year-old woman claims she was waiting for a bus around 3 a.m. on August 11 when she spotted Corley and flagged him down for a ride.

The victim alleged Corley drove to an area in Cobbs Creek and forced her to perform a sex act, then dropped her off at the 69th Street Terminal.

That's where the woman stopped a transit officer to report the attack, KYW reported.

"We are committed to rooting out those individuals who would violate the trust of the public and even commit crimes as a police officer. None of that is tolerable and we'll take whatever action we need to take in order to rid our ranks of them," Police Commissioner Charles H. Ramsey told KYW.

Ramsey suspended Corley for 30 days with the intent to dismiss, according to police.