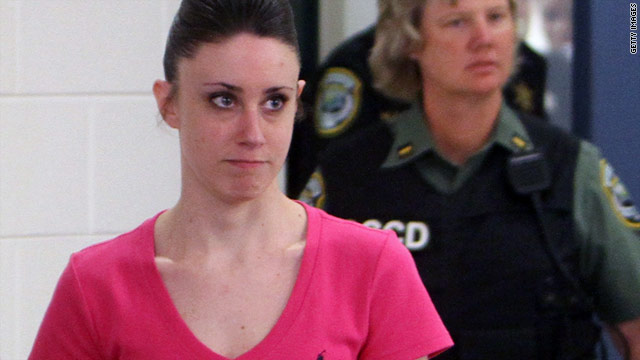 Casey Anthony has reported to the Florida Department of Corrections to serve one year probation for check-fraud convictions.
STORY HIGHLIGHTS

(CNN) -- Casey Anthony was "polite and cooperative" in her first meeting with her probation officer for check fraud and fraudulent use of a personal ID, a Florida Department of Corrections spokeswoman said Thursday.

Gretl Plessinger, the department's communications director, said that Anthony reported to a probation office Wednesday at 6 p.m. for a visit that lasted a little over an hour. Anthony previously had been sentenced to one year of probation, which including monthly check-in meetings plus "random contacts" in the public.

"She told the probation officer that she intended to do well on probation," Plessinger said of Anthony. "She was polite and cooperative."

In July, a jury acquitted Anthony on murder charges related to the 2008 death of her 2-year-old daughter, Caylee, though she was convicted on four counts for misleading law enforcement. The probation sentence stems from a different conviction, for which a judge sentenced her in January 2010, on felony check fraud for stealing a checkbook from a friend and writing five checks for $644.25.

Anthony's attorneys have argued repeatedly -- and, ultimately, unsuccessfully -- that their client should not have to serve her probation in Florida, pointing to a court document that erroneously stated she would serve her probation while in prison awaiting the murder trial.

As the corrections department had previously said in a statement, officials are not releasing Anthony's address "or anything that might lead to the discovery of her location," said Plessinger. This move is an effort to comply with a judge's order that Anthony's whereabouts should remain confidential for her own safety.

"The court made a pretty strong statement, talking about how she's one of the most hated women in America," Plessinger said.

"We want to make sure that she's treated like other offenders, in that if she violates these court orders, we will immediately notify the court. But we will put security measures in place."

Those measures include not inputting Anthony's information into a public database, as is typically the case with offenders. In addition, her probation officer will not be identified by name.

Under the terms of her sentence, Anthony must meet with her probation officer no later than the fifth day of each month.

She can't change her residence or employment and, as Plessinger said Thursday, her probation officer would have to OK a travel permit if Anthony wants to leave the county. Her probation office is in Orange County, unless she makes a request that is granted to move elsewhere in Florida.

None of Anthony's attorneys was present when she met with the probation officer Wednesday, the state spokeswoman said.

In that meeting, the officer "laid out for her, in detail, the conditions" -- after which Anthony indicated "she understood those conditions," said Plessinger.

Among other things, Anthony's sentence requires her to pay the state of Florida $20 per month toward the cost of supervision plus a 4% surcharge, unless the fees are waived.

During the period covered by the sentence, she will not be allowed to drink excessively.

She is also barred from any personal contact with the check-fraud victim for the duration of the probation period.

Orange County Circuit Judge Stan Strickland had earlier ordered Anthony to serve a year of probation after her release in the charges involving her daughter, but a clerk misunderstood the judge and prepared an order that the judge later signed, instructing that Anthony would serve the probation while in custody awaiting trial.

The order was updated August 1 to add the words "upon release."

But Anthony's lawyers contended that she couldn't be required to serve probation, arguing that she had already served it while in custody under a signed order from Strickland. They also argued that serving the probation sentence now would violate constitutional protections against having to serve a sentence twice for the same offense.

A Florida appeals court affirmed earlier this week that Anthony would have to serve the one-year probation sentence. She cannot, the court ruled, "take advantage" of an administrative error to avoid serving the sentence, which was first imposed in 2010.

This backed up a ruling earlier this month by Orange County Chief Judge Belvin Perry Jr., who said Strickland's verbal order was binding and ordered Anthony to report for probation in Florida on the bad-check charge by Friday.

The attorney general's office wrote that Anthony "upon her release (July 17), should have reported" for probation -- something she did not do.

In an emergency petition filed on Wednesday with the same appeals court, Anthony's defense team asked that the court overturn Perry's order before the required date. They also asked the appellate court to strip Perry of further jurisdiction in the case.