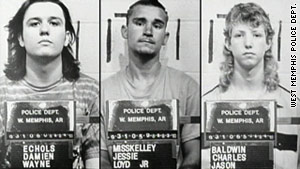 (CNN) -- Jason Baldwin paused Saturday on his first morning of freedom in 18 years to share a revelation he gleaned in prison while serving a life sentence.

The "West Memphis Three" member recalled telling inmates he had figured out the secret of life.

And enjoy it he did Friday and Saturday. Baldwin, Damien Echols and Jessie Misskelley Jr. -- freed Friday in Arkansas after a complicated plea arrangement -- spent time with family, friends and supporters.

Echols and Baldwin saw the sunset Friday from the rooftop of the Madison Hotel in Memphis, across the Mississippi River from West Memphis, Arkansas. Supporters Eddie Vedder of Pearl Jam and Natalie Maines of the Dixie Chicks joined the party.

The three men, who served 18 years in prison following their convictions in a 1993 triple-slaying in West Memphis, walked free Friday to cheers from a supportive crowd after entering rarely used pleas in which they maintained their innocence but acknowledged that prosecutors have evidence to convict them.

They had been imprisoned for the slayings of second-graders Steven Branch, Christopher Byers and Michael Moore.

The boys' bodies were mutilated and left in a ditch, hogtied with their own shoelaces. Prosecutors argued that the defendants, teenagers at the time, were driven by satanic ritual and that Echols, sentenced to death, had been the ringleader. Baldwin and Misskelley received life sentences.

"It was if you could see two little 5-year-old kids at their first Christmas," Braga told CBS' "Early Show" Saturday. "The idea you could take pictures with an iPhone totally blew them away."

Misskelley spent Friday night with his family near West Memphis.

"I have now spent half my life on death row," Echols said in a statement released Saturday. "It is a torturous environment that no human being should have to endure, and it needed to end. I am innocent, as are Jason and Jessie, but I made this decision because I did not want to spend another day of my life behind those bars."

Ellington said he believes the pleas resolve the case.

Baldwin, who said he prays for the victims' families, told WMC Saturday he hopes to return to school.

"Right now, I am floating on the hands of people who love and care for me, people trying to get my feet under me and everything," he said. "I'm just trusting God to take care of me."

The attorney claims the three freed men and supporters will push to see that the real killer eventually is found.

"He's still out there," Braga told CBS. "The right guys have been set free."