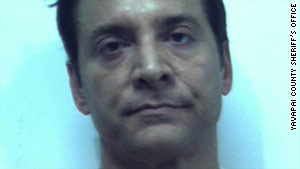 Author James Arthur Ray was found guilty of negligent homicide in the deaths of the ceremony participants.

(CNN) -- A self-help guru who was convicted in the deaths of three participants in an Arizona sweat lodge ceremony deserves a new trial, his attorneys argued Tuesday.

James Arthur Ray was found guilty of negligent homicide in the deaths of the participants, but an Arizona jury in June deemed him not guilty of manslaughter charges.

Negligent homicide means a defendant should have known better, while manslaughter suggests that the defendant knew and blatantly disregarded this knowledge.

Ray's attorneys went before a Superior Court judge in Yavapai County, Arizona, claiming he should be tried again because of prosecutorial misconduct, a court official said. The official, who was not authorized to speak to the media, said the hearing started shortly after 11 a.m. MT and ran until a lunch break. The hearing is scheduled to run for the rest of the day.

The defense claims the prosecution did not disclose evidence on time.

Ray's sentencing, originally scheduled for July 25, has been pushed back.

The case stems from an October 2009 ceremony in Sedona, Arizona.

Prosecutors claimed that Ray's recklessness in operating the sweat lodge caused the deaths of Kirby Brown, 38, of Westtown, New York; James Shore, 40, of Milwaukee; and Lizbeth Marie Neuman, 49, of Prior Lake, Minnesota.

At least 15 others who took part in the sweat lodge ceremony became ill. More than 40 others were uninjured.

Prosecutors argued that the lodge, made of willow trees and branches and covered with tarpaulins and blankets, was heated to a perilously high temperature, causing the participants to suffer dehydration and heatstroke. They also said Ray didn't monitor the temperature inside the lodge or the well-being of participants and was indifferent to those clearly having trouble.

Ray's lawyers countered that what happened was a tragic accident, not a crime. They asked witnesses who were in the sweat lodge whether they signed a release form warning them of the dangers. All replied that they signed, but some said they didn't read the form.

Ray's attorneys also suggested that exposure to an unknown toxin in the lodge -- perhaps a pesticide, rat poison or something in the type of wood used to heat the rocks -- could have caused the deaths.

Event participants paid up to $10,000 to seek "new areas of consciousness" at the October 2009 Spiritual Warrior retreat in the desert, according to trial testimony.