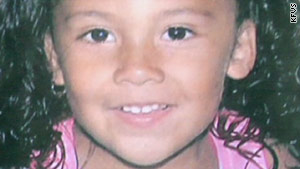 Breeann Rodriguez, 3, was last seen August 6 in front of her home in Senath, Missouri.

(CNN) -- A 43-year-old Missouri man has been charged with first-degree murder in the disappearance of a 3-year-old girl last seen a week ago riding her bicycle, the Dunklin County prosecuting attorney said Saturday.

Shawn Morgan of Senath has also been charged with armed criminal action and tampering with physical evidence, according to Dunklin County Prosecuting Attorney Stephen Sokoloff.

"It is charged that Morgan caused the death of (Breeann Rodriguez) by suffocating her," Sokoloff said in a statement.

The suspect is being held at the Dunklin County Justice Center.

Morgan lives in the same neighborhood as the girl, the statement said.

Authorities were searching Saturday for Breeann's body and bicycle in an undisclosed area in Dunklin County, the Senath Police Department and Dunklin County Sheriff's Office said in a statement. Police found two training wheels similar to those on a pink bike ridden by Breeann before she went missing, they said Thursday.

The girl was last seen August 6, riding with her brother in front of their home in Senath.

The city, which has about 1,800 residents, according to the U.S. Census Bureau, is in southeast Missouri's "boot heel" about 40 miles northeast of Jonesboro, Arkansas, and 90 miles north of Memphis, Tennessee.

Digital billboards with the girl's picture have been displayed in Jonesboro and Cape Girardeau, Missouri, about 100 miles north of where she went missing.