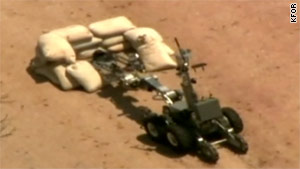 (CNN) -- FBI agents are looking into who left what appeared to be a crude explosive device attached to a natural gas line in rural Oklahoma, the bureau said Wednesday.

The "potential explosive device" was found late Wednesday morning outside Okemah, about 70 miles east of Oklahoma City, the FBI's Oklahoma City bureau said in a statement. Bureau spokesman Clay Simmonds said authorities used a water cannon to disrupt the device and took it to a laboratory for examination.

"We don't have any leads at this moment. We're going to examine the device further and talk to people in the area," Simmonds told CNN.

A law enforcement official who spoke on condition of anonymity told CNN the device was made up of black powder, propane and a timing device. The official could not assess how effective the device may have been or how much damage it might have caused.

CNN's Nick Valencia and Carol Cratty contributed to this report.