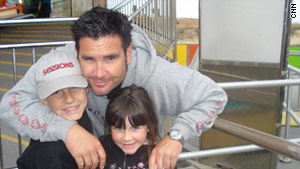 Late Wednesday, prosecutors announced they won't charge a woman who's the sister to one defendant and the girlfriend to the other because they don't have enough evidence against her, a spokeswoman said.

During their arraignment in Los Angeles County Superior Court, Marvin Norwood, 30, and Louie Sanchez, 29, both of Rialto, California, were ordered by the judge to remain in custody in lieu of $500,000 bail each.

She was taken into custody last month with her brother and boyfriend. Police allege that the two men kicked and punched Stow and then fled in a car driven by a woman.

The two men withdrew their earlier request for a bond reduction Wednesday, said Gilbert Quinones, Sanchez's attorney. Quinones said the withdrawal "was best" for his client in the high-profile case, but the defendants can renew the request later.

Authorities have also kept the two defendants from taking showers, having visitors and making phone calls -- which was done "for their own protection" while in jail, Quinones said. But the attorneys for the two defendants told the court Wednesday they would file requests to have those activities restored.

The two men are each charged with mayhem, assault and battery, and all three charges are felonies, according to the complaint provided by the Los Angeles County District Attorney's office.

Stow, a 42-year-old paramedic from Santa Cruz, California, went into a coma as a result of the March 31 beating in the parking lot of Dodgers Stadium after a game between the Giants and the Dodgers. Stow remained in serious condition Wednesday at San Francisco General Hospital and Trauma Center, spokeswoman Rachael Kagan said.

Sanchez is also charged with two misdemeanor counts -- one for battery and the other for assault -- against one person inside the ballpark and another person in the stadium parking lot on the same day, according to court documents provided by prosecutors.

Los Angeles County Superior Court Judge Upinder S. Kalra denied a media request Wednesday to have cameras in the courtroom because, he said, the identification issues surrounding the two men as defendants "are unresolved." But the judge allowed journalists to make an audio recording of Wednesday's court proceeding.

During arguments about the media's camera request, Los Angeles County Deputy District Attorney Frank Santoro told the court that authorities have statements from the defendants that prosecutors used to file charges. One is a direct statement from Norwood, and the other is a surreptitiously obtained statement by Sanchez, Santoro said.

Santoro also said that only one of about 20 witnesses identified Sanchez as allegedly being involved in the beating, but no witnesses have identified Norwood at the crime scene.

Asked about the alleged statements made by the defendants, Quinones said: "You know, assertions are made in a case. Making assertions and proving them are two different things."

Quinones also said that Wednesday was the first time he heard that authorities have only one witness identifying Sanchez at the alleged crime scene.

"That's a good piece of information to have," Quinones told reporters. "At this point, like I said, I'm waiting for further discovery."

Quinones said prosecutors still have to turn over 25 binders of information about the case, including video and audiotapes and photographs. So far, he has seen only about 20 pages and added that prosecutors just gave him Wednesday a copy of the grand jury transcript that he understood included testimony by Sanchez's sister.

"My understanding is that the family is close, and they have a good relationship," Quinones said of Sanchez and his sister.

The two defendants' next court hearing is September 30, the judge said.

Sanchez and Norwood were arrested at their San Bernardino County homes on July 21.

Earlier this week, Stow's family reported on their website that Stow showed the most response yet since the beating on the Dodgers' home opener: He lifted his left leg slightly when asked and raised his left arm every time family members asked if they could hold his hand.

"And the best part?" the family website said Monday. "Bonnie (Stow's sister) asked Bryan if she could have a kiss and every time she asked him, he puckered his lips. The final time when she was leaving, Bonnie asked again for a kiss. Bryan turned his head towards her, puckered his lips for the kiss, then turned his head back. The nurse was shocked and excited to see that!"

The website then added: "Side note from Bonnie: I have never, in my 32 years, thought I would kiss my brother on the lips, let alone that many times. But can't wait to do it again!

"Side note from Erin (another sister): I couldn't be there to see it, but I never thought I would be jealous of my brother kissing my sister on the lips ... regardless, I am chapsticking up for my next visit."