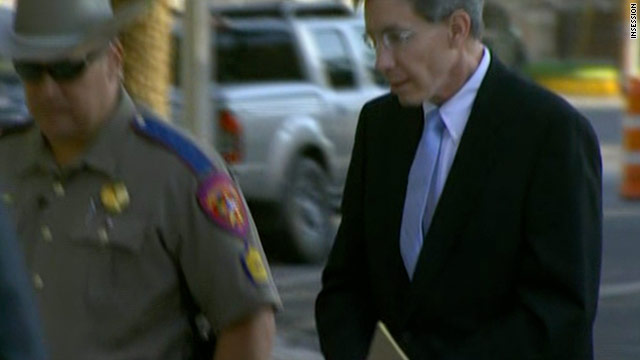 Tune in to HLN's "Nancy Grace" at 9 p.m. ET Tuesday for more on Warren Jeffs' sentencing.

Jeffs, 55, will have to spend at least 45 years in prison before being eligible for release, according to Jerry Strickland, spokesman for the Texas Attorney General's office.

"Justice has been served," Jeffs' nephew, Brent Jeffs, told InSession soon after the sentence. He testified during the penalty phase of his uncle's trial that Jeffs raped him when he was 5 years old.

"I finally had this day and it was an awesome day in court to be here, involved in all of this," said Brent Jeffs, now 28.

Jeffs perverted his position as the head of the Fundamentalist Church of Jesus Christ of Latter-day Saints to "satisfy his own personal appetites and desires," prosecutor Eric Nichols said.

Victim to Jeffs: 'He's where he belongs'

Nephew: Warren Jeffs capable of anything

Those appetites included forcing sex on the two girls, 12 and 15, who he had taken as wives, prosecutors said.

Audiotapes seized from his car and the church's Yearning For Zion Ranch compound in Eldorado, Texas, and played for jurors during his trial, depicted Jeffs offering "celestial marriage" instructions to the young wives, according to prosecutors.

"You have to know how to be sexually excited and to help each other ... and you have to be ready for the time I need your comfort," a man's voice says. "This is your mission. This is how you abide the law.

At one point, the man says, "Take your clothes off. Do it right now," followed by the sounds of crying.

"Just don't think about the pain; you're going to heaven," the man says.

"Rarely if ever in the criminal justice system in Texas have we ever encouraged a person such as Warren Jeffs, whose criminal conduct spans decades, multiple jurisdictions and hundreds of victims," Nichols said.

A former member of the church, Rebecca Musser, said the verdict will not bring back lost innocence. But she said it can help others escape from abuse they may have suffered.

"Whether the currency is God or greed, the trafficking of women and children for sex is a form of slavery," she said.

Jeffs is the eighth person from the ranch to be convicted on sexual assault, bigamy and other charges, according to the Texas Attorney General's office. Four others are awaiting trial.

Attorney General Greg Abbott said he believes authorities have rooted out the molesters from the ranch, but will continue to monitor the church's activities there.

"We have an ongoing open investigation that will evaluate all evidence about any kind of wrongdoing out there at the compound whatsoever," Abbott said.

Jurors came back with the sentence after 30 minutes of deliberations Tuesday.

They began their work Tuesday morning following brief closing statements by prosecutor Nichols. Jeffs, who has argued that he and his faith were being persecuted, instructed his attorneys to deliver no closing statement.

Jeffs did not attend the closing statement.

In addition to tape recordings that the state said depicted sex acts with minors, prosecutors also presented evidence that Jeffs knew he was wanted by federal authorities and that his behavior would be shunned by outsiders.

Referring to that comment, prosecutor Nichols said during his closing statement that "Yes, this is Texas. But no, we don't hang convicts anymore from the highest tree, and we don't have the ability to call down the wrath of the Almighty ... We as a people choose to isolate our worst offenders, to keep them away from their past and future victims."