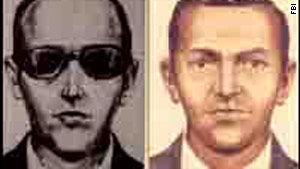 The FBI is looking at a new suspect in the 1971 hijacking case of D.B. Cooper, pictured in composite images.

Washington (CNN) -- For the past year the FBI has been actively working a new lead in the unsolved case involving skyjacker D.B. Cooper. But the information concerns a new suspect who has been dead for more than a decade, an FBI spokesman told CNN on Monday.

In November 1971, a man calling himself Dan Cooper hijacked a plane and succeeded in getting authorities to give him $200,000 and parachutes in return for letting passengers off the plane. The man then asked to be flown to Mexico but jumped out of the back of Northwest Orient Flight 305 somewhere between Seattle and Reno, Nevada. Authorities have never been able to prove whether the man survived or what his actual identity was.

A retired law enforcement officer brought a tip to the FBI about a year ago, said Fred Gutt, a spokesman for the FBI's Seattle Field Office. The retired officer had a contact who thought he or she knew the skyjacker's identity but added the suspect was dead. But that didn't mark the end of the trail.

"Family members of the deceased have cooperated with us and given us access to items which belonged to the deceased," Gutt said. The FBI's lab started looking for evidence that might prove the dead person was the man who skyjacked Flight 305. The FBI wanted to retrieve items with fingerprints belonging to the new suspect.

Gutt said the FBI knows Cooper had handled certain papers, including his plane ticket, and touched plane seats, but many fingerprints were found on those items. Through the years the FBI managed to identify some fingerprints but not all of them.

Although the FBI has been looking into the new lead for a year, it was first revealed during an interview with The Telegraph of London in advance of the 40th anniversary of the unsolved case this coming November.

On the afternoon of November 24, 1971, Cooper -- the "D.B." apparently was a myth created by the press, according to the FBI -- approached the ticket counter of Northwest Orient airlines in Portland, Oregon, and used cash to buy a one-way ticket to Seattle.

"Cooper was a quiet man who appeared to be in his mid-forties, wearing a business suit with a black tie and white shirt," the FBI said in a summary of the case on its website. "He ordered a drink -- bourbon and soda -- while the flight was waiting to take off."

But later, he handed a flight attendant a note saying he had a bomb in his briefcase and asking her to sit beside him. She did as she was told, and the man opened a "cheap attache case" and showed her a mass of wires and red-colored sticks and demanded that she write down what he told her. She wrote a note demanding four parachutes and $200,000 in $20 bills and walked it up to the captain, the FBI said.

When the flight landed in Seattle, the hijacker exchanged the flight's 36 passengers for the money and parachutes, the FBI said, keeping several crew members on board. The flight took off again after he ordered it to fly to Mexico City.

But Cooper jumped out of the plane. "The pilots landed safely, but Cooper had disappeared into the night and his ultimate fate remains a mystery to this day," the FBI said.

The "D.B." stemmed from confusion in a United Press International newsroom, the Post-Intelligencer said.

The FBI appealed for help from the public, releasing pictures of Cooper's black J.C. Penney tie -- which he removed before jumping and which later provided authorities with a DNA sample -- along with some of the found money.

The agency reminded the public that Cooper was no expert skydiver. "We originally thought Cooper was an experienced jumper, perhaps even a paratrooper," said Special Agent Larry Carr in 2007. "We concluded after a few years this was simply not true. No experienced parachutist would have jumped in the pitch-black night, in the rain, with a 200-mile-an-hour wind in his face, wearing loafers and a trench coat. It was simply too risky. He also missed that his reserve chute was only for training and had been sewn shut -- something a skilled skydiver would have checked."

Agents also believe Cooper had no help on the ground. If he had had an accomplice, he would have needed to coordinate closely with the flight crew and jump at just the right moment. "But Cooper simply said, 'Fly to Mexico,' and he had no idea where he was when he jumped," authorities said. "There was also no visibility of the ground due to cloud cover at 5,000 feet."

Several high-profile suspects have been ruled out over the years. Duane Weber, who claimed on his deathbed to be Cooper, was eliminated by DNA testing, the FBI said. Another man, Kenneth Christiansen, did not match the physical description and was a skilled paratrooper. A third, Richard McCoy, who died in 1974, also did not match the description and was at home the day after the hijacking having Thanksgiving dinner with his family in Utah -- "an unlikely scenario unless he had help," the agency said.

Fred Gutt said while the FBI understands there is great public interest in this long-unsolved case "it's a fairly low-priority case for the FBI" as it pursues new investigations involving cases like missing children that have a current impact on public safety.

Even so, Gutt said the FBI always follows up on any new tips on the case. On Sunday, another FBI spokesperson, Ayn Sandalo Dietrich, told CNN the information on the new suspect is not expected to be "a big break in the investigation."