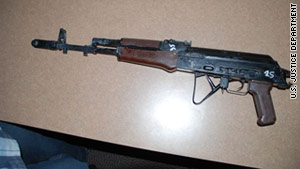 Los Angeles (CNN) -- Federal authorities are investigating whether any of the 26 AK-74 assault rifles and a Dragunov rifle stolen from the Fort Irwin Army Post has ended up in Fresno, California, a spokesman said Saturday.

The Bureau of Alcohol, Tobacco, Firearms and Explosives (ATF) and the Federal Bureau of Investigation have offered a $10,000 reward for information leading to the arrest and conviction of individuals behind the July 15 theft of firearms from an army supply warehouse in Fort Irwin, California, an ATF official said.

Authorities said some arrests were made after employees at the storage warehouse were interviewed, but no further details were available Saturday and other suspects were still being sought.

"Although our agents and officers are vigorously investigating this theft, we request the public's assistance to help us arrest and prosecute those individuals responsible for this crime," special agent John A. Torres of the ATF's Los Angeles office said in a statement. "Community participation is necessary to improve the likelihood that ATF and our law enforcement partners will track down the firearms as well as the criminals who have sought to destabilize our community through illegal activity."