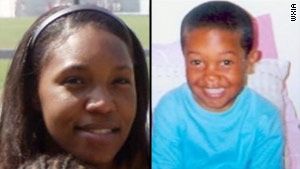 Raquel Nelson saw her son, A.J., die after being hit by a driver. Charges against her attracted national attention.
STORY HIGHLIGHTS
RELATED TOPICS

Check out CNN affiliate WXIA-TV in Atlanta for the latest information on the case.

Marietta, Georgia (CNN) -- A Georgia woman who was convicted on misdemeanor charges in the death of her son who darted out into traffic will not spend time in jail, a judge ruled Tuesday.

The case of Raquel Nelson had attracted national notice from parents, the NAACP and even transportation advocates who said the Marietta woman was being unfairly pursued for just trying to cross the street as any other pedestrian would do.

Dozens of the suburban Atlanta woman's supporters crowded the courtroom Tuesday and applauded as Judge Kathryn Tanksley sentenced her to 12 months of probation and 40 hours of community service.

She also said Nelson could seek a new trial.

"I'm walking out of here," Nelson told reporters after her sentencing. "I don't think you could be more satisfied."

Defense attorney David Savoy said his client is weighing her options, but would mostly likely seek a new trial.

Nelson and her three children had just gotten off the bus at a stop across from their apartment building in April 2010 when her 4-year-old son, A.J., broke away from her and ran into the street.

The man driving the car, Jerry Guy, fled the scene after the accident but later admitted being involved, according to CNN affiliate WXIA-TV. He was sentenced to five years in prison but served only six months. He is serving the remainder of the sentence on probation.

During the hearing, Savoy asked for mercy, saying his client had suffered enough.

Nelson told NBC's "Today" on Monday that the jury that convicted her likely couldn't relate to her because she is a single mother and they don't regularly use public transportation or need to walk on busy streets.

The case became a cause for radio talk show hosts, the NAACP and even transportation advocates, who said Nelson is being punished because she chose to cross the road at the bus stop across from her apartment instead of traveling to the nearest crosswalk, three-tenths of a mile away.

"Your office's decision to prosecute Raquel Nelson for the death of her four-year-old son on a vehicular homicide charge is disgusting and inhumane," wrote one poster to the Facebook page of the Cobb County Solicitor General's Office, which handled the case.