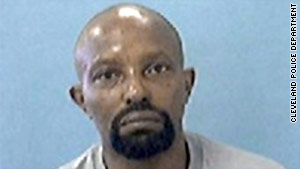 If convicted, Anthony Sowell could be executed. He's using an insanity defense against the 85 counts he faces.
STORY HIGHLIGHTS
RELATED TOPICS

Read more about the case from CNN affiliate WOIO.

(CNN) -- The defense rested Tuesday in the case of alleged Ohio serial killer Anthony Sowell, who is accused of sexually assaulting, killing and dismembering 11 Cleveland-area women between 2007 and 2009.

The defense called no witnesses and presented no evidence during the trial, according to CNN affiliate WOIO. Prosecutors rested their case against Sowell on Monday.

Opening statements in the trial were held June 27. If convicted, Sowell could face the death penalty. He has pleaded not guilty by reason of insanity to the 85 counts he faces.

Investigators at Sowell's home discovered the remains of the 11 women -- ages 25 to 52 -- beginning in October 2009. Since then, other women have come forward alleging that Sowell attacked them, too.

In April 2010, prosecutors handed down a 10-count indictment against Sowell in connection with the alleged rape of a 34-year-old woman in his home.

Sowell grew up in East Cleveland, joined the Marines at age 18, and traveled to California, North Carolina and Japan, authorities said. People who interacted with him after his 2005 release from prison, where he had served 15 years for attempted rape, said he appeared to be "a normal guy," known locally for selling scrap metal.

Neighbors and even a city councilman had failed to realize that the stench wafting in the area around Sowell's home was from human flesh, not a byproduct of a nearby sausage factory.

Cuyahoga County Prosecutor Bill Mason has said that his cold case unit is reviewing unsolved murders that occurred when Sowell lived in Cleveland and East Cleveland to see if there are any connections. Mason said the group is working its way through 75 cases.