New York (CNN) -- Levi Aron, arraigned in a New York court Thursday on charges of murder and kidnapping in the first degree in the killing of an 8-year-old boy, was remanded under suicide watch until a mental evaluation is completed.

Aron, 35, showed no emotion as he entered the court handcuffed and did not enter a plea. He said earlier in a statement that he was sorry for the trouble he has caused, said New York Police Commissioner Ray Kelly.

Defense attorneys Pierre Bazile and Gerard Marrone told the court that Aron has said he hears voices and hallucinates. They requested an exam to determine whether Aron understands the charges, and asked authorities to keep him under suicide watch while he's in custody.

"I have sincerest concerns about the defendant's mental state and his cognitive abilities," Bazile said.

Aron's next court date is July 28.

Kings County District Attorney Charles J. Hynes had said he would ask a grand jury for the "maximum charges permitted by law" for "the vicious and callous murder and dismemberment of eight-year-old Leiby Kletzky."

Police found human remains in Aron's freezer and a trash bin which they believe are those of the boy, who went missing Monday afternoon.

'I've been in total shock'

Community in shock after boy's murder

"Obviously in this business you see a lot of violence, but there's usually some sort of irrational twisted logic that's given to why a violent event took place," Kelly said.

"Here, I mean it's just, it defies all logic and I think that's what's really so, so terribly disturbing about this case. There's absolutely no reason. There's nothing more innocent than an 8-year-old child and to be, you know, killed in this manner it's just ... heartbreaking."

Police said Aron, 35, made statements Wednesday implicating himself in the death of Kletzky. Both are members of the close-knit Orthodox Jewish community in Brooklyn.

Kelly said detectives found the remains in a freezer in Aron's third-floor attic apartment and in a trash bin more than two miles away, wrapped in a black plastic garbage bag inside a suitcase.

A cause of death has yet to be determined but police believe Kletzky was suffocated.

Kletzky was supposed to meet his parents after walking seven blocks from his summer day camp, but became lost and asked the suspect for directions, Kelly said.

Surveillance video showed Aron entering a dentist's office Monday while Kletzky waited for him across the street for seven minutes, Kelly said. 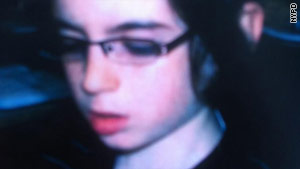 Aron claims he took Kletzky to a wedding Monday night in Monsey, New York, and then brought him back, Kelly said. Police said Aron went to the wedding, but have not been able to confirm that Kletzky actually went with him, as no one has said they've seen him.

According to Kelly, police showed up at Aron's residence at 2:40 a.m. Wednesday and asked him about Kletzky's whereabouts. The suspect pointed them to the kitchen, where blood was visible on the freezer handle. Inside the refrigerator was a cutting board with three blood-spattered carving knives, Kelly said.

Aron, a clerk at a maintenance supply company, did not appear to have known Kletzky, Kelly said. His only known criminal summons was for urinating in public last year. 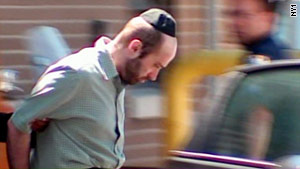 Police say the 35-year-old Levi Aron made statements Wednesday implicating himself in the death of Leiby Kletzky.

Kelly said that statements made by the suspect indicated that he kidnapped Kletzky and, as a neighborhood search for the boy intensified, he became panicked and killed him.

Aron's ex-wife, Debbie Aron of Memphis, Tennessee, said she also has been in "total shock" since she heard the news.

She said her children from an earlier marriage lived with her when she was married to Levi Aron and that he helped take care of them. He also enjoyed karaoke.

"I can't believe it. It's definitely not in his character from ... the person I knew," she told CNN affiliate WMC. "Even as I talked to him not long ago, everything was fine, no indications that anything was wrong."

FBI spokesman Jim Margolin said the FBI assisted in interviewing witnesses and deployed the FBI's Crimes Against Children squad in the case.

Hikind said the case has widespread implications beyond the community he represents.

"This is not a story just about Brooklyn, New York. ... This is a story about every single family in America and throughout the world," he said. "It's about protecting our children doing whatever we can to make sure they're safe."