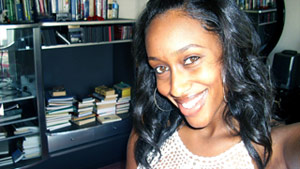 Mitrice Richardson disappeared in September 2009. Her remains were found about eight miles from the police station.
STORY HIGHLIGHTS

Los Angeles (CNN) -- Los Angeles County authorities exhumed the remains Wednesday of a woman whose mysterious disappearance and death in Malibu Canyon have been the subject of a family crusade for justice, the coroner's office said.

The grave of Mitrice Richardson, who disappeared at age 24 in September 2009, was exhumed so that her family's private pathologist could investigate the remains, said Ed Winter, assistant chief of operations and investigations of the Los Angeles County Department of Coroner.

The cause of Richardson's death remains undetermined, Winter said Wednesday.

"We just don't know," Winter said about the cause of death.

Her remains were scheduled to be reburied in Inglewood (California) Cemetery Park on Wednesday afternoon, he said.

The exhumation also took place so that authorities could return to her grave some of her bones that were found after her body was discovered in Malibu Canyon in August 2010, Winter said.

The bones, found on two different occasions following the discovery of her body, underwent DNA analysis to confirm that they were Richardson's, Winter said.

Last January, after an emotional public appeal, Richardson's mother persuaded Los Angeles County authorities to exhume the remains and involve the FBI crime lab in examining them and Richardson's clothing.

The exhumation and the FBI participation marked a victory in Latice Sutton's long struggle to get authorities to investigate her daughter's mysterious disappearance as a murder.

Richardson disappeared after she left the Los Angeles County Sheriff's Lost Hills/Malibu station, where she had been detained for allegedly being unable to pay $89.51 for food and drink at a Malibu restaurant.

At one point in the controversy over her death, Richardson's father, Michael Richard, blamed the Sheriff's Office for releasing his daughter without any assistance even though she had mental health issues and was in a manic state. He accused local authorities of providing special treatment and transportation to celebrities running afoul of the law such as Mel Gibson and Charlie Sheen, but said his daughter didn't receive similar courtesy.

Richardson's skeletal and mummified remains were found about eight miles from the sheriff's station, in the Monte Nido section of the Santa Monica Mountains, which bisect Los Angeles, Latice Sutton said.

Los Angeles County Sheriff Lee Baca has said Richardson's case showed "no indication of a homicide," but he and the coroner's office agreed to the exhumation as a matter of cooperation with her family.

"We've been working with family ever since her remains were recovered," Winter said Wednesday.