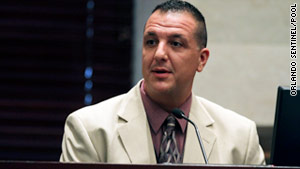 Tune in to HLN's "Nancy Grace" at 8 p.m. ET for the latest news on Casey Anthony.

Orlando (CNN) -- The detectives who built the murder case against Casey Anthony said Tuesday they stand behind their evidence but urge the public to respect the jury's acquittal of her.

"In any case -- especially a case with this many witnesses and this much evidence -- you can always look back and improve on what you have done," Orange County Sheriff's Office Sgt. John Allen told reporters. "I don't know if anybody up here can think of anything we could have done differently that would change the outcome."

Anthony was found not guilty last week on felony charges, including capital murder, in the death of her 2-year-old daughter, Caylee. She was convicted of four misdemeanor counts of lying to investigators. In a related issue, prosecutors announced Tuesday that Anthony's mother, Cindy Anthony, won't face perjury charges stemming from her testimony in the trial.

The verdict followed three years of intense publicity surrounding Caylee's death and provoked outrage among many who watched the case closely.

"I wish there was something I could say that would bring closure to everyone, but there isn't," another of the investigators, Cpl. Yuri Melich, said Tuesday. "I just know that, unfortunately, people are going to have to come to their own sense of closure within themselves and understand that as far as this case is concerned, as far as the judicial system is concerned, there's nothing else we can do."

Is Casey Anthony's life in jeopardy?

Will mystery Anthony tape be seen?

Anthony, 25, was given the maximum sentence on each of the misdemeanor counts -- a total of four years. But with credit for the time she has spent jailed since her 2008 arrest, she is slated to be released Sunday.

"But for us, I certainly don't have any doubt after working on this," he said. "I felt our case was solid."

Orange County Sheriff Jerry Demings said that despite the "plethora of chatter" surrounding the controversial verdict, investigators have not received any "credible threats" to Anthony and won't offer any special protection to her upon release.

In a case built on circumstantial evidence, prosecutors accused Anthony of using chloroform to render her daughter unconscious, then duct-taping her mouth and nose to suffocate her. They alleged that she put the child's body in the trunk of her car for a few days before disposing of it.

Her lawyers argued that Caylee accidentally drowned in the Anthony family's above-ground pool, and that Casey Anthony and her father, George Anthony, panicked and covered up the death -- something George Anthony denied on the witness stand.

Meanwhile, prosecutors had raised the possibility of perjury charges against Cindy Anthony after she testified that she -- not her daughter -- was responsible for Internet searches about chloroform on the family's home computer. She said that evolved from a search for "chlorophyll" as she was trying to determine if her dog's habit of eating bamboo plants in the back yard was making it tired.

But work records showed Cindy Anthony was at work at the time the searches were conducted. Though she said she could have left early that day, a lawyer for her former employer testified that work records indicated someone using her credentials was logged in and using a desktop computer at her office on the days when those searches were performed.

Demings had told reporters that the state's attorney's office would make a decision on whether to seek perjury charges "in the near future," and that office announced its decision a few hours later.

"We are not going to pursue perjury charges against Cindy Anthony," said Danielle Tavernier, a spokeswoman for the state's attorney's office.

The case began drew national attention in part because Anthony failed to report Caylee missing for a month, during which she moved out of her parent's home, partied in Orlando nightclubs and shopped. When confronted, she accused a nonexistent nanny of taking the girl.

Caylee's skeletal remains weren't found until December 2008, six months after she was last seen alive. If her body had been discovered earlier, "I would like to say that maybe more evidence would have been found," Allen said. "But it's impossible to say."

Anthony's scattershot defense included challenges to forensic evidence; allegations that she had been molested by her father; an attempt to cast suspicion on the meter reader who discovered the girl's body; and an unsuccessful attempt to call her own competency to stand trial into question. Ultimately, however, lead attorney Jose Baez argued that the prosecution's case failed to show how the girl died, and left jurors with "more questions than you have answers."

Allen said detectives had no evidence beyond "Casey's word" that her father had sexually abused her -- an allegation George Anthony also denied in his sometimes-emotional testimony. And Melich said Casey Anthony never said anything about an accident when she was questioned by police about her daughter's disappearance.

"That would have been her opportunity to say so, had it been," Melich said. He added, "Even to this day, I'm still surprised that she just didn't come off it, she wouldn't tell us the truth."

"That's all we were after, was the truth -- that day, this whole thing could have ended had we known the truth."