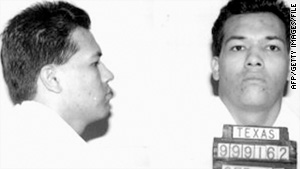 Humberto Leal Garcia Jr., 38, was convicted of raping Adria Sauceda, 16, in San Antonio, Texas, and then killing her.
STORY HIGHLIGHTS

(CNN) -- Humberto Leal Garcia Jr., a Mexican national convicted of raping and killing a 16-year-old girl in 1994, was executed by lethal injection Thursday evening in Texas.

The case's flurry of legal appeals and pleas for clemency were prompted by an international dispute over the rights of the foreign-born on American death rows.

The Supreme Court earlier denied a stay of execution for the convicted killer, despite opposition from the Obama administration and the Mexican government.

What made Leal's conviction unusual was that he was not informed about his right to contact the Mexican consulate upon his arrest -- a right guaranteed under a binding international treaty. Leal's appellate lawyers argued such access could at the very least have kept Leal off death row.

Leal, 38, was convicted of raping Adria Sauceda, a 16-year-old girl in San Antonio, and then fatally strangling and bludgeoning her with a 35-pound piece of asphalt in 1994.

The Supreme Court justices split 5-4 along conservative-liberal lines in denying a stay of execution. In an unsigned opinion by the majority, the court refused to delay the execution until Congress could pass pending legislation giving federal courts the authority to hear similar claims from foreign inmates.

In dissent, four justices led by Stephen Breyer urged a delay in moving ahead with Leal's execution. "It is difficult to see how the State's interest in the immediate execution of an individual convicted of capital murder 16 years ago can outweigh the considerations that support additional delay, perhaps only until the end of the summer," said Breyer, who was supported by Justices Ruth Bader Ginsburg, Sonia Sotomayor, and Elena Kagan.

Sandra Babcock, lead appellate attorney, said, "it is shameful that Mr. Leal will pay the price for our inaction. The need for congressional action to restore our reputation and protect our citizens is more urgent than ever."

The victim's mother, Rachel Terry, had called for the execution.

"A technicality doesn't give anyone a right to come to this country and rape, torture and murder anyone, in this case my daughter," she told CNN affiliate KSAT in San Antonio. Terry described her daughter as "a beautiful, bright, vibrant young woman, full of hope and aspirations."

"It's been difficult for myself and her family members," she added. "She certainly was taken away from us at a very young age. We just want closure."

Leal's lawyers argued the consulate access violation was more than a technicality. Babcock told CNN that Mexican officials would have ensured Leal had the most competent trial defense possible, if they had been able to speak with him right after his felony arrest.

"I think in most of these cases it was not a deliberate thing. Local police lack training" on the Vienna Convention, Babcock said, referring to the international agreement that includes consular access.

Leal's backers say he had learning disabilities and brain damage, and suffered from sexual abuse at the hands of his parish priest, and that consul officials would have assisted in such a defense. They say those factors should have been considered at the sentencing phase of the trial.

Leal claimed he did not learn of his consular access right until two years after his capital conviction. He said he learned of the right not from any official, but from a fellow prisoner.

Eventually, between 2010 and 2011, Leal was visited by a representative of the Mexican government more than 10 times, said Judy Garces, press relations spokeswoman with the Mexican Consulate in San Antonio.

The state argued that Leal -- who has lived in the United States since age 2 -- never revealed his Mexican citizenship at the time of arrest, and his defense team never raised the consular access issue at or before trial.

Prosecutors also said the evidence against him was indisputable. The victim was tortured, and a bite mark on her body was matched to Leal. A bloody shirt belonging to Sauceda was discovered at the suspect's home. The two had attended a party separately earlier that evening. The girl's nude body was found on a dirt road.

Leal was one of 40 Mexican citizens awaiting lethal injection in U.S. prisons.

The issue turned on what role each branch of government plays in giving force to international treaty obligations.

Three years ago, the Supreme Court justices concluded Texas could execute another Mexican man sentenced to death for murder. Jose Medellin was given a lethal injection by the state a few months later.

The question then and now is whether the state has to give in to a demand by the president that the prisoner be allowed new hearings and sentencing. In the 2008 case, President George W. Bush made that demand reluctantly after an international court concluded Medellin was improperly denied access to his consulate before his original prosecution, a violation of the treaty signed by the United States decades ago.

The Mexican government filed a supporting appeal with the high court in Washington this past week, asking the justices to block Leal's execution, citing Bush's previous executive action.

On Friday, the Obama administration asked Texas to delay the execution.

Congress has also stepped in. Sen. Patrick Leahy, D-Vermont, chairman of the Judiciary Committee, introduced a bill in June to formally grant federal courts the power to review these kinds of appeals.

Cruz is now running for the U.S. Senate as a Republican candidate.