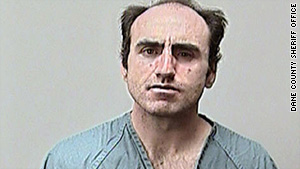 Washington (CNN) -- Are James V. McVay's statements the shocking confessions of a man who planned to kill the president? The exaggerated claims of someone seeking attention? The rantings of a lunatic?

Police, prosecutors and others are asking those questions after McVay, 41, was charged in the vicious stabbing death of a 75-year-old woman in Sioux Falls, South Dakota.

Stopped by police Saturday near Madison, Wisconsin, some 450 miles away from the killing, McVay confessed not only to the stabbing, but to a crime he said he hoped to commit: the assassination of a president.

In statements to police, and in an unusual jailhouse interview with reporters, McVay said:

-- He had spent two years while in prison developing a plan.

-- He planned, first, to kill someone in Sioux Falls and steal that person's vehicle to drive to Madison.

-- In Madison, he would break into another house to kill the occupants and steal their vehicle, or he would ambush a Madison police officer to steal that officer's gun.

-- He planned to travel through Chicago, stopping again in Indianapolis to kill people and steal a vehicle to drive to Washington.

"I'm going to kill and kill until I get him," he told police, referring to President Obama.

"One of his favorite pastimes, golfing; I was going to get him at the golf range," McVay said in a remorseless interview with WKOW-TV reporter Tony Galli.

It was not the first time McVay had made threats of this nature. In 2009, following an arrest involving another stolen car, McVay told police he had planned to travel to Washington where he intended to harm Vice President Joe Biden.

Police notified the U.S. Secret Service, who twice questioned McVay, as well as family members and acquaintances. During the second interview, McVay recanted his statement about wanting to harm the vice president, a spokesman with the Secret Service said.

Court documents provide a detailed account of McVay's alleged actions during the past week, when he again came to the attention of authorities.

Schein was in her bedroom, dead of knife wounds to the neck.

The victim's white 2007 Buick Lucerne was missing. Police soon learned the car was equipped with an OnStar device that allowed GPS tracking of the vehicle, the affidavit says.

Investigators contacted OnStar, learned the car was near Madison, Wisconsin, and asked police there to stop it.

The driver at first refused to stop, and police chased the car, eventually using a spike strip to bring it to a halt, police said. The driver, McVay, "had a brief standoff with the officers before being taken into custody," police said.

As McVay was being placed in a patrol car, he made an unsolicited comment. "He said that he had 'killed an old lady' by stabbing her," and that he had stolen her car, police said.

McVay waived his right to remain silent and continued talking, police said, outlining his plan to travel to Washington to kill Obama.

McVay said he spent two years developing the plan, "solidifying" the plan about two weeks earlier when he discovered he was going to be released from South Dakota State Penitentiary to a halfway house. He said he walked away from the Sioux Falls halfway house on Friday, stole clothes and camping knives from a Walmart, and slept under a bridge for the night.

On Saturday he awoke, walked into a nearby neighborhood, slipped into a partially open garage, used the knife to unlock the door to the residence, killed Schein and stole her car, according to his account in the affidavit.

McVay is charged with premeditated murder, first degree murder and four burglary-related counts. He is represented by a state public defender, who could not be immediately reached Thursday.

This week, when Wisconsin TV reporters interviewed McVay, he told them of the earlier interrogations by the Secret Service. "I played the game that I didn't have any homicidal intentions and I talked to Secret Service," he said.

But, McVay told the reporters, his feelings hardened against Biden and Obama while he was in solitary confinement. McVay cited Obama's economic policies and other moves as a basis for the assassination plot, but also said alien forces were using Obama as a "puppet," WKOW reported.

On Thursday, a Wisconsin judge ordered a competency evaluation of McVay.

This week, Secret Service agents again interviewed McVay. But the Secret Service officials declined to say whether they believe McVay intended to attempt an assassination. And a spokeswoman for the U.S. attorney's office said the office is reviewing the case, but no decision on federal charges has been made.