Tune in to "Nancy Grace" Thursday night at 8 ET, live from Orlando, for more on Casey Anthony's sentencing. Then, Saturday night at 9 ET on HLN, don't miss a special two-hour event, "Justice for Caylee: A Nancy Grace Special."

(CNN) -- Jose Angel Baez, the workhorse lawyer who won acquittals for Casey Anthony at the most-watched murder trial in years, may be either the best criminal defense attorney in America -- or the luckiest.

It took him eight years to convince the Florida Supreme Court to let him practice law, and he'd been trying cases for just three years when the Anthony case came along.

Many observers of the seven-week murder trial said he was in over his head and predicted doom. The judge scolded him so often he became the bad boy of Courtroom 23. Bloggers and trial watchers took to calling him "Bozo."

In the end, none of the digs mattered because Baez got results. Convicted and pilloried in the court of public opinion, Anthony was cleared of all murder-related charges in a court of law.

Whether by luck or by skill, Baez suddenly is looking less like a clown and more like the Hispanic version of late legal legend Johnnie Cochran.

They're calling him "Juani Cochran."

In a lengthy interview with "In Session" in April, the 42-year-old Baez recalled being in law school and ducking out of class to watch O.J. Simpson's televised murder trial. Cochran became one of his heroes.

"I could win this case and I could win several more, and I still couldn't accomplish what Johnnie did in his time practicing law," Baez said. "I don't like the comparison, because I don't deserve it."

Baez entered the Anthony case as an unknown, but his status skyrocketed overnight after her acquittal. Now, he has an agent to field calls from Barbara Walters and invitations to sail on Geraldo Rivera's yacht.

The new darling of the cable chat circuit is remarkably ordinary, the type of low-budget, constantly hustling defense attorney found in courthouses everywhere -- working the calendar calls, the jails, the bail bondsmen in a constant search for clients.

That's how he came to meet Casey Anthony.

"Apparently there were a couple of people in the jail that gave her my name, referred me to her," he said. "I've built up a hard reputation of fighting for my clients. 100% of my business comes from referrals. I don't advertise, I don't have television ads or billboards or anything like that and I never have."

Anthony recalled her decision during a recorded jailhouse visit with her parents. The recording was played at the trial:

"It kind of happened at random in booking," she said. "I heard a couple of people talking about attorneys. His name came up and I said, 'If he's good, can you do me a favor and pass my name along?'"

Baez had to listen in court as the parents expressed their doubts about him in another recorded visit.

"I just hope that the compassion that he says he has is genuine," said George Anthony, an ex-cop. "I hope he's not building a reputation for himself."

Here's how Baez bills himself on his law firm's web site: 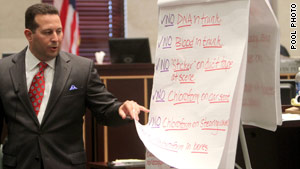 Click on any of them, and you are returned to the top of the home page.

"I relate to people," he said in the "In Session" interview, conducted before the trial began. "People make mistakes. We all have erasers on our pencils. We've all done some stupid things in life that should not define us."

Like his clients, Baez has acquired a few scuffs and dings.

He was born in Puerto Rico in 1969 and raised by a single mother in Miami and the Bronx. He dropped out of Miami's Homestead High School his freshman year and married at 17 when he learned he would be a father.

"When I found out I was going to be a father, I decided I had to man up and accept responsibility and take care of my child. So at 17, I joined the Navy," he said. "It's amazing what a child does to you."

He earned his GED and later attended Miami-Dade Community College and Florida State University. Law school was almost an afterthought. Asked why he decided to go law school at St. Thomas University, he responded, "a girl."

He had to wait eight years for admission to The Florida Bar, according to public records. A Florida Supreme Court ruling in 2000 highlights the Bar's concerns about "JAB's" character and finances, citing his failure to pay child support and other debts and expenditures such as signing up for a gym membership he couldn't afford. (All Bar matters refer to the candidates by their initials, and Baez's struggle with The Florida Bar has been widely reported. He declined to discuss the incident in detail with "In Session.")

While he waited for admission to the bar, he worked as an intern for the Miami-Dade Public Defender's Office, taught lawyers to conduct research and launched four companies, including two that sold bathing suits; Brazilian Bikinis and Bon Bon Bikinis. 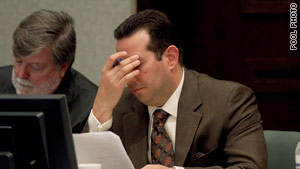 Baez is confident in his ability to outwork his courtroom opponents.

"There's no better place for a young lawyer to learn how to be a lawyer than the Miami-Dade Public Defender's Office," he said. "I was surrounded by great lawyers ... There is a culture there of really learning how to fight for your client and if you're not a fighter, then you don't belong there."

He finally was admitted to the bar in 2005, and began to practice in Orlando and nearby Kissimmee, where he lives in a gated community overlooking a golf course and a lake.

Before the Anthony case, Baez said, he tried more than 45 cases, including four alleging murder. None of his clients had been convicted of first-degree murder, he boasted.

He is most confident about his ability to outwork the opposition. "If I can do that, then I stand a chance and that is my goal," he said during the "In Session" interview.

Though he has been criticized for the celebratory nature of the defense team's gathering after the verdict -- cameras caught members dancing and drinking champagne -- Baez has mostly avoided the white light of fame. When he first took on the Anthony case and camera crews began staking out his office, he made them park across the street. He said he doesn't watch news reports about his cases anymore.

"You're one day practicing law and you're occasionally on the 11 o'clock news. The next day you're in the middle of this blood sport," he said . "And you become a story."

A lot of times, he added, that story is exaggerated or simply not true.

"I had a stomachache once," he recalled. "I went to the hospital, and it was on the national news the next day that I was freaking out or something along those lines. I think (the reports said) I was caving under pressure and I might be quitting and things like that, and it really was just bad Mexican food."

It is not clear how much he has been paid to represent Anthony, although he could be in line for a percentage of any book or movie deals stemming from the case. Suffice it to say that given the time he has put into the case, his hourly rate dips well below the minimum wage. But he can't put a price on the satisfaction he felt after Casey Anthony was acquitted of murdering her daughter.

"When I get home tonight and my daughter asked what I did today, I can say I saved a life," Baez told reporters after the verdict. "My driving force the last three years has been to make sure there has been justice for Caylee and Casey, because Casey did not murder Caylee. It's that simple."