Authorities: Woman tries to sneak husband out of jail in suitcase 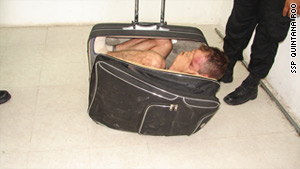 Police say Juan Ramirez Tijerina tried to escape in this suitcase with the help of his wife, Maria del Mar Arjona.

(CNN) -- A 19-year-old woman was arrested for allegedly trying to sneak her husband out of prison in a suitcase, according to authorities in the Mexican Caribbean state of Quintana Roo.

According to officials at the prison in the city of Chetumal, the state's capital, the woman identified as Maria del Mar Arjona was caught as she was leaving the prison, pulling a black-wheeled suitcase.

Authorities said that as she was walking up a staircase to leave the prison, Arjona hit the suitcase against the stairs. When something inside the bulky suitcase moved, guards noticed and stopped Arjona, who acted nervously. The guards then looked inside the suitcase and found her husband, Juan Ramirez Tijerina.

Cesar Manuel Castilla, a spokesman for Quintana Roo's Department of Public Safety, says that in any case it would have been extremely difficult for the inmate to escape in the suitcase.

"We have three inspection stations at the prison and he was caught in the first one," Castilla said. "In any case, she would have been asked to open the suitcase for inspection at the third and last inspection station. I don't know what they were thinking."

Pictures of the incident released by Quintana Roo's Department of Public Safety show the man curled up inside the suitcase in a fetal position. He was covering his face when the pictures where taken.

Ramirez is serving a sentence at the Chetumal prison after being convicted of federal drug trafficking charges.

He was immediately returned to his cell while Arjona was detained. She now faces multiple charges stemming from the Saturday incident. According to Castilla, Arjona is six months pregnant. She fell ill after being detained. Charges and a court appearance are pending while she recovers at a state hospital.

Arjona was at the prison for a conjugal visit, Castilla said.