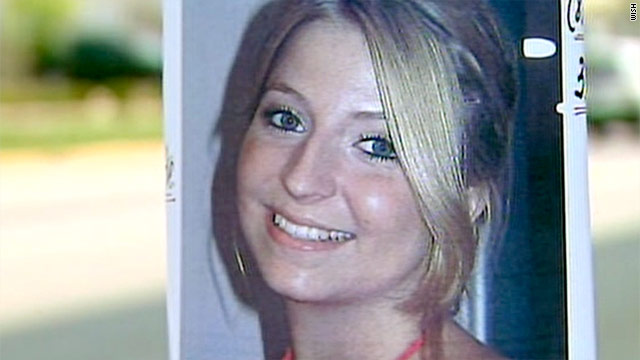 Police have been searching for Lauren Spierer since June 2, when she was last seen leaving a sports bar.
STORY HIGHLIGHTS

(CNN) -- The body found in a creek near Indianapolis is not missing Indiana University student Lauren Spierer, a medical official said Tuesday.

Forensic tests found no link to Spierer and have determined the body belongs to an African-American female, said Alfarena Ballew, chief deputy coroner for Marion County.

Officials believe the decomposed body had been in the creek for about two and a half weeks before it was discovered on Sunday.

Bloomington police have been searching for Spierer, a 20-year-old sophomore, since June 2, when she was last seen leaving a sports bar after a night out with friends.

In mid-June, police found possible new clues to Spierer's disappearance -- images of a white pickup caught on a security surveillance video. But they ruled out a connection.

Officials have received thousands of tips, but none so far have yielded anything concrete.

In late June, hundreds of volunteers searched a 10-mile area in Indiana in an event called "Find Lauren Day."

Spierer's mother was at the event and thanked the volunteers even though they were not successful.

Charlene Spierer described her daughter as a sweet, bubbly girl.

"Perhaps it was a terrible accident that happened and we can deal with that," Charlene Spierer said in late June. "What we can't deal with is what we don't know. So information is the most valuable thing we need right now."

Officials still don't know how the body ended up in Fall Creek. Ballew said her office will use DNA evidence and dental records to help identify the woman and make a determination about how she died.