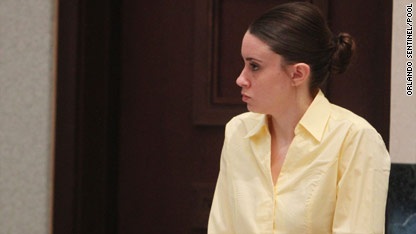 (CNN) -- As Casey Anthony alternately cried, glared and shook her head, prosecutors in her capital murder trial told jurors in closing arguments Sunday that evidence in the case points to only one conclusion -- that she murdered her 2-year-old daughter Caylee.

"When you have a child, that child becomes your life," prosecutor Jeff Ashton told the seven-woman, five-man jury. "This case is about the clash between that responsibility, and the expectations that go with it, and the life that Casey Anthony wanted to have."

Defense attorney Jose Baez, however, told jurors, "I probably think you have more questions than you have answers." And the central one, he said, remains how Caylee died.

Just after 6:30 p.m., before the prosecution could offer its rebuttal to the defense's closing presentation, Orange County Chief Judge Belvin Perry Jr. dismissed the jury for the day.

"I want all of you bright-eyed and bushy-tailed," Perry told the jury. "It's been a long day, (and) it will be a long day tomorrow."

Jurors are expected to start deliberations Monday -- even though it is the Independence Day holiday -- to decide if Anthony, now 25, is guilty of killing Caylee. She is charged with seven counts, including first-degree murder, aggravated child abuse and misleading police. If convicted of first-degree murder, she could receive the death penalty.

Casey Anthony has pleaded not guilty to all charges, and denies harming her daughter.

Prosecutors allege that the Orlando woman used chloroform to render her daughter unconscious before putting duct tape over her nose and mouth to suffocate her. She left Caylee's body in the trunk of her car for a few days before disposing of it, they allege.

At one point as Baez spoke, Ashton could be seen smiling or chuckling behind his hand, prompting Baez to refer to him as "this laughing guy over here." Ashton objected and the judge called a sidebar conference, then a recess.

When court resumed, Perry chastised both sides, saying both Ashton and Baez had violated his order that neither side should make disparaging remarks about opposing counsel. Both attorneys apologized, and Perry said he would accept that for now but warned against a recurrence, saying if it happened again that attorney would be excluded from the courtroom.

Because of the delay, the judge said he would instruct jurors on Monday, as a few jury instruction issues must still be sorted out.

Following Baez's remarks, defense attorney J. Cheney Mason talked to jurors about the law and their duty, cautioning them to not take Casey Anthony's refusal to take the stand in her own defense as evidence of her guilt.

In the prosecution's closing argument, Ashton outlined the state's case against Casey Anthony, touching on her many lies to her parents and others, the smell in her car's trunk -- identified by several witnesses as the odor from human decomposition -- and the items found with Caylee's skeletal remains in December 2008.

He started with the fabrications, telling jurors Casey Anthony "maintains her lies until they absolutely cannot be maintained any more" -- and then replaces it with another lie. "Call it Casey 3.0, the new version," Ashton said.

Ashton disparaged the defense's theory in the case -- that Caylee drowned June 16 in the Anthonys' above-ground pool, and that Casey Anthony and her father, George Anthony, panicked upon finding the child's body and covered up her death. George Anthony has denied that scenario ever happened.

The defense's arguments, Ashton told jurors, "require you to suspend your common sense," likening them to "a trip down a rabbit hole" into a world where loving grandfathers do nothing when they find their granddaughter dead; cover up an accident; and where "a man who buries his pets will take the granddaughter, who is the love of his life, and throw her in a swamp. This is the world the defense invites you to occupy."

Judge Perry: 'No facts of molestation'

But Baez said the drowning is "the only explanation that makes sense." He showed jurors a photograph of Caylee opening the home's sliding glass door by herself. There were, he said, no child safety locks in the home. Both of Casey Anthony's parents, George and Cindy Anthony, testified that Caylee could get out of the house easily, he said.

Ashton detailed the numerous stories Casey Anthony told her parents and others after Caylee was last seen on June 16, 2008, and the lies she told police after the girl's grandmother reported her missing 31 days later. During those 31 days, Casey Anthony's friends and acquaintances testified she was shopping, hitting nightclubs and staying with her boyfriend, but did not tell them Caylee was missing. If they asked her daughter's whereabouts, they said, she often said Caylee was with her nanny, Zenaida Gonzalez.

Ashton also went over items found with Caylee's remains, including a Winnie the Pooh blanket that matched the little girl's bedding at her grandparents' home, one of a set of laundry bags with the twin found at the Anthony home, and duct tape he said was a relatively rare brand.

"That bag is Caylee's coffin," Ashton said, holding up a photograph of the laundry bag, as Casey Anthony turned her head to the side, pressed her hand to her mouth and closed her eyes.

But Baez, the defense lawyer, told jurors his biggest fear is that they will base their verdict on emotions, not evidence.

"Caylee Anthony was a beautiful, sweet, innocent child who died too soon," he said as Casey Anthony began to cry. "And that is not disputed by anyone."

But, he said, prosecutors "gave you two weeks of testimony that was irrelevant," in an attempt to make the jury hate Casey Anthony and play on their emotions, something Baez called "improper."

"Casey has issues," Baez said. "And these issues were there long before Caylee was ever born and long before June 16, 2008."

He said he was "not proud of the way Casey behaved. I don't think anybody here can justify her actions, but they do not constitute murder."

"These people are different," Baez said of the Anthony family. "This girl is different. And this is why she behaved in this way."

He dismissed the state's alleged motive -- that Casey Anthony was tired of being a parent and wanted to be an independent 22-year-old -- as "nonsense."

"She had no motive," he said of his client. "Casey treated Caylee well. She loved that child." No witnesses, he reminded jurors, ever testified that Casey Anthony was anything other than a loving mother.

Baez continued the defense's efforts to focus suspicion on George Anthony, saying he lied repeatedly on the stand, even testifying against his daughter. George Anthony "doesn't have an ounce of paternal instinct," he said.

Ashton, however, said, "There is absolutely no possibility, reasonable or otherwise, that George Anthony had anything to do with disposing of this body. He is a doting grandfather who loved that child literally more than life itself," referring to George Anthony's suicide attempt in January 2009 after Caylee's remains were found.

Baez said the suicide attempt came because George Anthony was nervous at the authorities nosing around him.

He also tried to cast suspicion on Roy Kronk, the former Orange County meter reader who found Caylee's remains, alleging he knew where the remains were for months.

Testimony regarding the vile odor emanating from Casey Anthony's trunk, Baez said, "does not shed any light on how Caylee died. Period." For all the witnesses that testified about the smell, other witnesses testified they noticed no smell in the car, he pointed out.

"We all know Casey acted inappropriately, and made some mistakes and bad decisions," Baez said, noting Casey Anthony should have called the police and not attempted to "block this out." And if she committed a crime in doing so, he said, the state can charge her for it. But, he said, prosecutors have "overcharged" the case "... just because it's entertainment."

Just before closing arguments began, Perry prohibited defense attorneys from bringing up allegations that Casey Anthony was allegedly sexually abused by her father or brother.

The defense had sought to explain Casey Anthony's behavior during the month before Caylee's disappearance was reported to police by suggesting she had been schooled from an early age to hide her feelings after her father began abusing her when she was 8. George Anthony denied abusing his daughter in testimony.

Baez said in his opening statements that Casey Anthony's brother, Lee Anthony, also abused her, but "it didn't go as far" as that with her father.

Perry said there are "no facts in evidence or reasonable inferences that can be drawn ... that either Mr. George Anthony or Mr. Lee Anthony molested or attempted to molest Ms. Anthony."

But the prosecution offered a very different story, trying to convice the jury -- who were picked in Pinellas County, Florida, due to publicity surrounding the case in Orange County -- that Casey Anthony killed her daughter because the conflict between the life she wanted and the life she had was "irreconcilable."

"The evidence in this case proves beyond any reasonable doubt that Casey Anthony decided on June 16 that something had to be sacrificed," Ashton said Sunday.