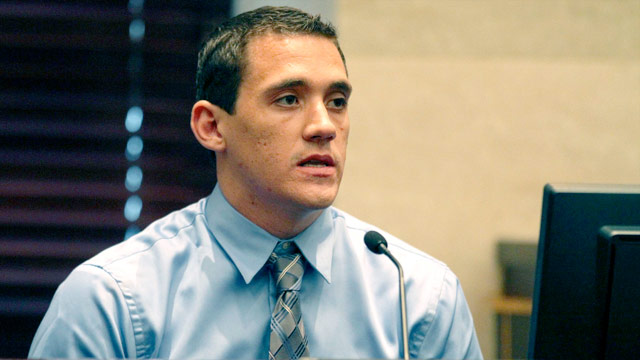 (CNN) -- Casey Anthony's former fiance testified outside the presence of jurors in her capital murder trial Tuesday, saying she once told him her brother Lee Anthony had groped her while she was sleeping.

Jesse Grund said he had a conversation with Casey Anthony about her brother in 2005, as he noticed Lee was "standoffish" and "sullen" and wanted to know why.

He said Casey Anthony told him she did not want her then-newborn daughter Caylee around her brother, adding that "at one point in recent years," she had awakened to find her brother standing over her staring at her, and that on another occasion he was groping her.

He said he did not want to hear more, and believed her. "Anything that Casey said, I took as truth and fact," he testified.

The state objected to Grund's testimony, saying it was hearsay and is not admissible.

Defense attorney Jose Baez told Orange County Chief Judge Belvin Perry Jr. the defense may have additional arguments on Wednesday morning, so Perry did not immediately rule on whether Grund can testify before the jury.

Casey Anthony, 25, is charged with seven counts, including first-degree murder, aggravated child abuse and misleading police, in 2-year-old Caylee's 2008 death. Prosecutors are seeking the death penalty against her.

The defense says Caylee accidentally drowned in the family pool and that Anthony and her father panicked and covered it up. George Anthony has denied that theory.

Roy Kronk said he couldn't at first comprehend what he was looking at. He said he put his "meter reader stick," a piece of metal about 5 inches long, into the right eye socket and "gently pivoted" it upward to make sure, then put it back.

"It was a horrific thing for me to find," he testified, adding later that "it really unnerved me."

Kronk acknowledged making three phone calls to authorities in August 2008 in an attempt to report something he saw in the woods. "I was trying to do the right thing," he said, but on August 13, a deputy responded to the area and "chewed me out," saying Kronk was wasting county time.

Kronk said he went into the woods to relieve himself on August 11 and saw "something that looks white" and a gray bag, according to his testimony and a transcript of the call. He called authorities again on August 12 and 13. Court documents show the deputy who responded August 13 told Kronk the area had already been searched.

He said he did not return to the site until December 11 and did not know whether the skull was what he had seen in August. In August, he said, the area was wet and swampy; in December it was not, and also was not as overgrown as in the summer.

In his opening statement, Baez pointed the finger of responsibility at Kronk.

According to the defense, Kronk actually discovered the remains months earlier. Baez called Kronk "a morally bankrupt person who took Caylee's body and hid it ... he thought he had a lottery ticket. ... He can't be ignored in this."

Kronk denies Baez's allegations, according to his attorney, David Evans.

Kronk testified that he lifted a bag found near the remains about 4 feet off the ground, but said he had made a mistake in an earlier statement and denied that the skull had fallen out when he did that.

Defense attorney J. Cheney Mason asked whether Kronk discussed the $255,000 reward in the case with deputies immediately following the discovery. Kronk said he might have, and may have said "jokingly" that he didn't want his ex-wife to find out if he received the money.

He also denied a defense suggestion that he called his son in November -- before the body was found -- and told him he was about to be famous.

Mason suggested Kronk was attempting to cash in on the case, noting he needed $1,000 to have his truck repaired right before the remains were found.

However, on cross-examination, Kronk told prosecutor Linda Drane Burdick that he needed money in the months before that, too, for other reasons. He also testified, over objections from the defense, that he had no access to the Anthony home, other than the meter in their front yard; or to Casey Anthony's Pontiac Sunfire; the garage in the Anthony home; the backyard; the Anthony family computer; Caylee Anthony's clothing or blankets; or any duct tape in the Anthony home.

After August 13, "because of how you were treated, you let the matter go?" Burdick asked. "Yes, ma'am," Kronk said.

Following Kronk to the stand was fellow meter reader David Dean and Kronk's former supervisor, Alex Roberts. Dean testified he had previously predicted to Kronk that Caylee's remains would be found in the wooded area. Roberts said after Kronk called him on December 11, he arrived to find him smoking a cigarette and leaning against his truck.

Orange County Chief Judge Belvin Perry would not allow Baez to ask Roberts about any statements Kronk may have made regarding the reward, and he was dismissed from the stand after a lengthy sidebar conference.

The defense also called two Orange County corrections employees to the stand, both of whom either work or used to work in the unit of the jail where Casey Anthony has been incarcerated since October 14, 2008.

Perry dismissed jurors for the day after Burdick objected to the first witness, Sgt. Dennis Moonsammy, saying the testimony was irrelevant. Perry allowed Moonsammy and another employee, Marlene Baker, to testify outside the presence of the jury.

Moonsammy testified that Casey Anthony is in protective custody because of her high-profile case, and is kept in her cell 23 hours a day on days when she is not in the courtroom. He testified that he is required to speak to each inmate in the unit daily, and described Casey Anthony as "very pleasant, always smiling without hesitation," even when he wakes her up. She is, he said, a "model inmate."

Baker testified that Casey Anthony would sometimes cry, but was always pleasant.

Perry refused to allow either witness to testify before jurors, agreeing with Burdick that their testimony is irrelevant. Grund was called to testify after the two corrections employees.

The attorneys also wrangled Tuesday outside the jury's presence about whether grief expert Sally Karioth can testify. Baez told Perry that prosecutors refused to take Karioth's deposition on Saturday when they had the chance.

Prosecutor Jeff Ashton said he was told Karioth knows nothing about the case and was not sure what to ask her that would help the state's case, and said the defense agreed that she could testify outside the jury's presence. But Baez told Perry that Karioth was traveling from Tallahassee and if she does travel, she should be able to testify.

Perry said some of Karioth's testimony may be admissible, but some of it may not. "I guess we'll go in and out like Pop-Tarts tomorrow," he said. "... We wll see tomorrow what the testimony will be."

Perry also said he will hear arguments Wednesday morning on a motion filed by the defense asking him to reconsider his earlier decision to declare Florida's death penalty unconstitutional in light of a recent federal court decision.

On June 20, U.S. District Judge Jose Martinez, found the method used to reach a death sentence in Florida is improper "because it does not require a jury to make the findings of fact necessary to impose a death sentence." Perry previously had denied such a motion by the defense.

Earlier, Casey Anthony's father took the stand again, his frustration at the defense's allegations against him evident as he denied having an affair with a volunteer searcher and telling her that his granddaughter's death was "an accident that snowballed out of control."

"I never had a romantic affair with Krystal Holloway, or River Cruz, or any name she wanted to give you or the world," George Anthony angrily told Baez. He added that the woman has a "questionable past" and a criminal record.

Baez told jurors in his opening statement that George Anthony had an affair with Holloway. "Krystal will tell you one day they had a conversation and George began to cry and she asked him what happened (to Caylee), and he said it was an accident that snowballed out of control."

George Anthony testified he did visit Holloway at her gated condominium, showing identification to the complex guard, "to console" her after she told him that she had a brain tumor and was dying. He said because she was helping him and his family search for Caylee after she disappeared, he felt it "was the least I could do."

He said his wife -- Casey Anthony's mother, Cindy Anthony -- was aware he visited Holloway and had also been told about her brain tumor. He said he always visited during the day, as he could set his own hours at his job.

This is the sixth week of testimony in the trial. Opening statements began on May 24.

Perry originally told jurors, who are being housed in an Orlando hotel shielded from media coverage of the trial, that the trial could last six to eight weeks.

Baez told Perry Tuesday that after Karioth, the defense has about six witnesses left. Last week, Baez said he expected the defense to rest on Wednesday or possibly Thursday. That would leave room for a rebuttal case from the prosecution and closing statements before the Independence Day holiday. Perry called an abrupt recess Saturday morning, and it was unclear how the delay would affect those plans.

Caylee was not reported missing to police until July 15, 2008, when Cindy Anthony tracked down her daughter Casey and demanded answers regarding Caylee's whereabouts. Prosecution witnesses testified that Casey Anthony spent time with her boyfriend, went shopping and to nightclubs during the month her daughter was missing, but told no one she had disappeared. They testified they noticed no change in her demeanor.

George Anthony has denied the claims that he abused his daughter or helped cover up his granddaughter's death.