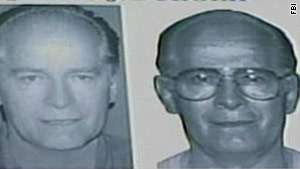 (CNN) -- James "Whitey" Bulger lived "a relatively comfortable lifestyle" with his girlfriend for the 16 years he was a fugitive, including numerous gambling trips to Las Vegas, according to a government document filed in his case Monday.

Bulger, 81, and Catherine Elizabeth Greig, 60, were arrested Wednesday after he was lured out of his Santa Monica, California, apartment by an FBI ruse. The alleged East Coast mobster, who was on the FBI's Top 10 Most Wanted list, faces charges in 19 mob-related murders.

The U.S. Attorney's office in Boston, where Bulger is being prosecuted, filed a response Monday to his request that the federal government pay for his defense because of his lack of money.

Agents found $822,198 in cash -- "much of it in packages containing $100 bills that were bundled together and hidden inside a wall in the apartment" -- when they searched his home last week, prosecutors said.

Bulger "waived his Miranda rights" and told agents who were taking him back to Boston that he had been "a frequent traveler as a fugitive."

Bulger told FBI agents he traveled back to Boston "on several occasions while 'armed to the teeth' because he 'had to take care of some unfinished business,' " the document said. Bulger refused to tell the agents any details of his Boston visits, it said.

The government also said Bulger admitted to stashing cash away "with people he trusted," although he would not identify them, it said.

Prosecutors suggested that Bulger's brother, William Bulger, "might also be willing to pay for an attorney to represent his brother." They asked the court to require him to submit an affidavit before a decision is made.

James Bulger cannot be trusted to tell the truth about his finances, the government argued.

"He has every incentive to lie and stick the taxpayers with the bill for his defense," prosecutors said. "Accordingly, the court should not simply rely on Bulger's own claims of indigence but instead should make further inquiry on this matter by requiring sworn affidavits from the defendant's brothers, William and John."