Santa Monica, California (CNN) -- The alleged East Coast mobster and his girlfriend were known as Charlie and Carol Gasko, a May-December couple living in the heart of sunny Southern California, just two blocks from the beach and an upscale outdoor mall, in a town known for its unapologetic liberalism.

But their real names were James "Whitey" Bulger, 81, and Catherine Elizabeth Greig, 60. And recently, Greig had been telling friends that Bulger was showing signs of Alzheimer's and was suffering depression, unable to sleep or to get out of bed, neighbor Catalina Schlank told CNN.

One manager of a restaurant just down the street recalled how the alleged gangster and his girlfriend liked the privacy of a far corner table and once worked up a $192 bill, plus tip, for a steak and lobster dinner, accompanied by foie gras, vodka highballs and chardonnay.

Until this week, Bulger had been on the lam for 16 years and was on the FBI's Top 10 Most Wanted list, facing charges in 19 mob-related murders.

Bulger was arrested Wednesday after he was lured out of his apartment by an FBI ruse: He received a phone call and was told that his lockbox had been broken into in the basement parking lot area of his apartment building. When Bulger went down to check it out, FBI agents arrested him, a source said Friday.

His longtime girlfriend was arrested inside the apartment, where the FBI later found 30 firearms, authorities said.

Bulger's alleged barbarity as an Irish-American mobster in Boston inspired the Jack Nicholson character in Martin Scorsese's 2006 film "The Departed."

For the past several years, the couple hid in plain sight in this palm-tree-lined oceanside city by Los Angeles. They were largely quiet, polite neighbors who occasionally helped Schlank carry her groceries or newspaper, said Schlank, who lives in the same building as Bulger and Greig.

Out of generosity, Bulger even gave her a flashlight for her first-floor apartment.

They lived in a three-story building named Princess Eugenia, which features pine trees, a brick stoop and a rose bed.

It was clear that the couple didn't want to be bothered: They didn't answer their phone, and an answering service would take messages, Schlank said Friday. 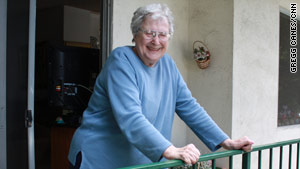 "He was a handsome, old man," Schlank said. "She was beautiful."

Bulger often wore a hat and pulled down the brim, said Schlank, who at age 88 is the most senior tenant in the building, having lived there since 1974.

"They were kind of secretive. Even on the phone, you couldn't call them," Schlank said. "Sometimes, I wanted to give them a tip of stuff on sale."

Schlank was put off by the answering service.

"After a while, I said forget about it," she said.

Another neighbor, Denise Walsh, who lives four doors down from apartment 303, where Bulger and Greig lived for up to 15 years, said the couple often walked hand-in-hand and stopped to pet dogs, telling people they were canine lovers.

"He was very avuncular, she was very sweet. They were very kind people from my knowledge of them," Walsh said.

But when she learned of the allegations against Bulger this week, she felt frightened, Walsh said.

"I actually was really shaking because I was really saddened to know it was them," Walsh said. "It's like finding out your grandparents are murderers."

Several blocks up the street is an intersection with Montana Avenue, a boutique and restaurant district catering to Santa Monica's more affluent residents. Celebrities also frequent the blocks-long strip of one-story storefronts.

In between those districts was Bulger's and Greig's apartment. Their fake name, Gasko, is still on the doorbell list of tenants.

Their stucco building sits in a dense knot of apartments and million-dollar condos -- in which residents largely mind their own business unless someone strikes up a conversation, neighbors said.

For an alleged gangster steeped in the baseball-bat brutality of Boston violence, Bulger and his girlfriend chose an unlikely destination to live, neighbors said.

Santa Monica is known for its its left-leaning politics, with heavy restrictions on public smoking and a citywide emphasis on recycling and going green. Its nickname is "The People's Republic of Santa Monica."

It was amid this bustle of pedestrian-friendly and tourist-loving activity that mobster and moll avoided detection -- until the FBI began a publicity campaign focusing on the girlfriend this month.

"Was he even hiding?" asked Frank Quinn, 45, a copier salesman who works down the street from the Bulger apartment.

Quinn made a visit to the apartment building Friday, because he's from a suburb south of Boston, Dedham. As a youth, he knew well the name of Whitey Bulger in that city's Irish-Catholic community, Quinn said. Bulger's reputation was one of "a guy you didn't mess with," he said.

"He was all cash," Quinn said, referring to the FBI's reported discovery of more than $800,000 hidden in the apartment.

One resident found Bulger's ability to enjoy life just blocks from her alarming. She was surprised by how the couple enjoyed a rent-controlled unit, in which the city limits annual rent increases by landlords.

"It's really mind-boggling," said Madeline Davis Heller, an arbitrator who was walking her mixed-breed dog, Sallie, past the Bulger apartment Friday. "Santa Monica is notorious for rent control and background checks. I don't know how they got past.

"But they did have all this forgery stuff," she added, referring to the FBI having found fake IDs for the couple in their apartment.

Bulger and Greig sometimes did step out at local institutions and dined at Michael's restaurant two blocks down the street. It's a white-tablecloth establishment of 32 years, known for attracting Hollywood producers, said general manager Andrew Turner, 41.

The couple dined there a few times in recent years and made reservations under the name of "Mr. Gasko" on the OpenTable Internet reservation service, Turner said.

They kept to themselves and always sat at Table 23 in the corner of the garden patio, at the back of the restaurant, lush with trees and plants, Turner said.

He said he shook hands with the couple, as he does with all diners.

Owner and cookbook author Michael McCarty has created a cozy space that includes art in oils and pencil for his guests.

"They were pleasant, but they kind of kept to themselves and certainly did not have, as far as I can tell, any interaction with any other guests," Turner said.

In September 2009, Bulger and Greig had two Grey Goose vodka cocktails, two chardonnays, and an appetizer of foie gras. For an entree, Bulger had a 10-ounce, 28-day aged New York strip steak, and Greig had lobster, Turner said.