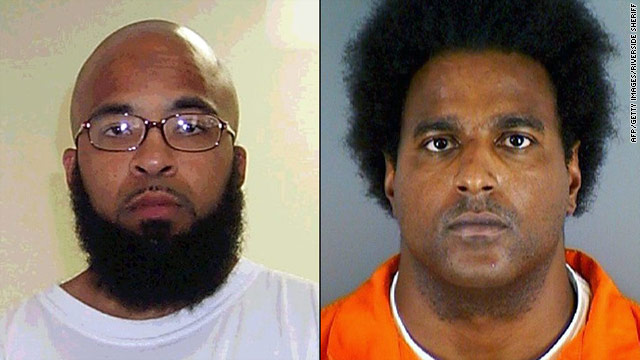 Washington (CNN) -- Two U.S. citizens from Seattle and Los Angeles -- described as "would-be terrorists" by the FBI -- have been arrested and charged with plotting to kill Americans enlisting in the armed forces in Seattle, federal officials announced Thursday.

"Driven by a violent extreme ideology, these two young Americans are charged with plotting to murder men and women who were enlisting in the armed forces to serve and protect our country," said a top counter-terrorism official at the Justice Department.

Acting Assistant Attorney General Todd Hinnen said the threat was averted and the public was not endangered because of the intervention of the Joint Terrorism Task Force.

When the suspects attempted to recruit a third man, that individual instead went to the police, authorities said.

"Because someone stepped forward we were able to disrupt a very deadly attack," said U.S. Attorney Jenny Durkan.

Agents began monitoring Abdul-Latif and Mujahidh in the past month and collected audio and videotapes of the pair discussing a violent assault on the Military Entrance Processing Station in Seattle.

Law enforcement officials said that unbeknownst to the defendants, the weapons they obtained, including machine guns, were rendered inoperable and posed no risk to the public.

The two suspects initially planned their attack on Joint Base Lewis-McChord in Washington state, but later changed targets and decided to assault the recruiting station.

According to a source working with federal agents, Abdul-Latif said the original plan to attack Fort Lewis "would be in retaliation for alleged crimes committed by United States soldiers in Afghanistan," a court document said.

The subjects allegedly were interested in carrying out a deadly attack to gain maximum attention, according to the criminal complaint against them.

"We're not only trying to kill people, we're trying to send a message. We're trying to get something that's going to be on CNN and over the world. That's what we want," said Abdul-Latif, according to the court document.

Mujahidh was quoted in the document as saying, "Ain't gonna be no innocent women and children. That's why I'm saying we go in there and lay everybody down, man. Everybody in that building is connected with the military," he said.

The two suspects appeared in federal court in Seattle late Thursday, where they heard the changes against them. They were not asked to enter a plea. The two men were ordered held without bail pending a preliminary hearing scheduled for July 7. Both defendants said they could not afford attorneys, so the court provided them with public defenders.

The plot allegedly involved a conspiracy to use grenades and firearms which they would use to kill the victims and then use to fight police as they made their escape.

The men are scheduled to appear before a federal magistrate in Seattle later Thursday to hear the charges against them.