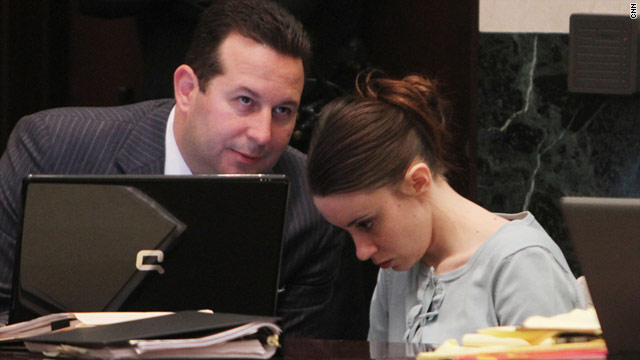 Casey Anthony confers with defense attorney Jose Baez, who hasn't said whether she will take the stand.
STORY HIGHLIGHTS

That is the burning question making the rounds at the courthouse in Orlando, Florida, where Anthony is on trial for murder.

Seasoned criminal defense lawyers are split down the middle: Some see huge risks and questionable benefits; others say Anthony's lawyers have little choice but to put her on the stand.

It is always a defendant's decision whether to testify or remain silent. A lawyer can only offer advice. And that advice is one of the toughest calls a defense attorney has to make.

In Anthony's case, defense attorney Jose Baez has not said whether she will take the stand. But he laid his cards on the table in a strong opening statement: He said 2-year-old Caylee drowned in the family's backyard pool, and that her grandfather, Casey's father, helped cover it up. He said his client had been sexually abused by her father since she was 8 and trained to "lie, lie, lie."

George Parnham, best known for defending Andrea Yates, the mentally ill woman who drowned her five children in the bathtub in 2001, says that opening statement "boxed the defense in." He says Anthony has to tell her story.

"She needs to get up there and defend herself," he said. "The jury is going to want to hear from her."

Anthony, 25, is accused of murder, aggravated child abuse, misleading authorities and other offenses. If convicted of murder, she faces the death penalty. In Florida, only seven jurors have to agree on a death sentence.

Parnham, who successfully used an insanity defense for Yates but did not put her on the stand, said he usually decides in favor of letting a jury get to know his client in death penalty cases. "If you humanize her, that may save her life. You've got a woman who, if she is convicted, her life is going to be in jeopardy. She's going to be on death row."

During the prosecution's case, jurors heard plenty from Anthony through videotaped jailhouse visits with her parents, recorded phone conversations and interviews with police.

Recorded during the search for Caylee, the videos portray Anthony as angry, profane and self-absorbed, not as the distraught mother of a missing child. She cursed out her mother, fussed about her appearance to her father, and told her brother, "I'm a spiteful bitch."

And then there was the web of lies witnesses said she wove during the 31 days she concealed the fact Caylee was missing.

Read more about the dramatic trial

Now, Anthony sits silently as her lawyers' crime scene experts pick at the prosecution's evidence. The judge has indicated the case could go to the jury by the weekend.

Atlanta attorney B.J. Bernstein, who won on appeal the underage sex case of Genarlow Wilson, says the jury needs to hear from Anthony as she is now, not as she was in 2008. She needs to come clean for the jury.

"Although she did lie before the trial, part of the draw in this case has been the weirdness factor of her family," she said. "Maybe if she can provide light on the strange behavior of her family, it could cause doubt, especially when we don't really have a cause of death."

Bernstein said testifying could be dangerous for Anthony because it shifts the attention back to her and away from the prosecution's lack of direct evidence.

"If she goes up, the goal can't be 'Like me and therefore believe me,'" she said. "It's going to have to come across as honest, right then and there. Not another drama, but [her testimony] must be a real explanation for the stack of lies and bizarre behavior."

Parnham agrees that Anthony can perform damage control on the witness stand. "When she has lied, she has got to admit, 'Yes, I did this. Yes, I said that. It was not true.' They're aware of the lies, and that will decrease the harm of admitting them. But she can't lie to that jury."

Other veteran criminal defense attorneys fear putting Anthony on the stand would do more harm than good.

"Here's the basic problem," said Los Angeles criminal lawyer Harland Braun, whose famous clients included actor Robert Blake: "If you don't put her on and she's convicted, she'll say, 'If only I testified.' If you put her on and she's doesn't do well, then every lawyer in town and all of the talking heads will be asking, 'Why did he do it?'"

But who else can tell the story of sexual abuse and dysfunctional family secrets promised by defense attorney Baez as the trial opened?

Karin Moore, who teaches evidence and capital defense at Florida A&M University's law school, says Baez made a "tactical error," perhaps promising more than he could deliver. She says putting Anthony on the stand is risky.

"So much damage has already been done," said Moore, who is attending the trial. "I am wondering if being on the stand two days under aggressive cross examination would be worse than having to eat crow during closing arguments."

She believes Baez could argue that prosecutors did not prove the crime of murder, so he decided not to pursue the abuse defense.

"We don't have fingerprints, we don't have a confession, we don't have any direct evidence," Moore said. The circumstantial evidence includes computer searches of terms such as "chloroform" and "neck-breaking," a car reeking of death, and duct tape wrapped around a tiny skull found months later near the Anthony home.

"It's such a great leap from 'She's a bad person and reacted in a way we don't understand' to 'She murdered this child,'" Moore added. "I don't know how they're going to make that leap with this evidence."

"It's a rare case that gets better after the prosecution rests," he said. "When you have somebody who's infamous -- and she is infamous, not famous -- there's a presumption of guilt."

Geragos added that while the prosecutors' circumstantial evidence is thin, they have benefited from what he calls the "character assassination" of Anthony, "much of it self inflicted."

Like the other defense lawyers who spoke with CNN, Geragos thinks proving murder is a stretch for prosecutors.

"They've done a wonderful job of proving a coverup," he said. "But the problem is the underlying crime hasn't been proved."

As for Casey Anthony, Geragos said: "She hasn't helped herself. But then again, defendants rarely do."