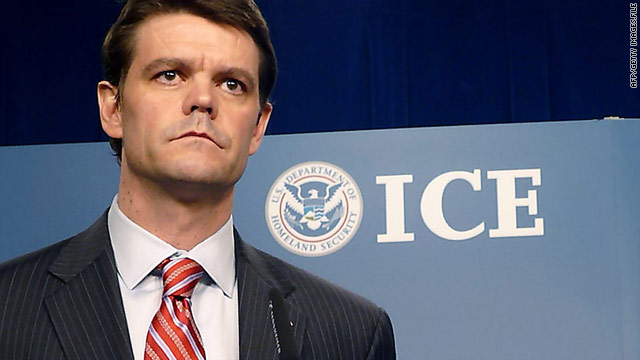 (CNN) -- Federal officials announced Tuesday the arrests of more than 2,400 illegal immigrants in a seven-day crackdown targeting those who are convicted criminals.

The operation, called Cross Check, was conducted by U.S. Immigration and Customs officials in May, federal officials said in a press release.

"The results of this operation underscore ICE's ongoing focus on arresting those convicted criminal aliens who prey upon our communities, and tracking down fugitives who game our nation's immigration system," ICE Director John Morton said in a statement. "This targeted enforcement operation is a direct result of excellent teamwork among law enforcement agencies who share a commitment to protect public safety."

The announcement comes after ICE announced key reforms to its Secure Communities program, which had been criticized by community activists and state officials.

"The big problem is that they were getting mostly noncriminals," Audrey Singer, senior fellow at the Brookings Institution and an expert on U.S. immigration policy, told CNN Tuesday. "In many communities across the country, local police have made a lot of headway with local residents. Secure Communities made that relationship more fragile. In some cases, there was a fear that immigrants would not continue to go to police when a crime was committed."

Pablo Rodriguez, executive director of Communities for a New California, said Cross Check, if not carried out correctly, may have the same fundamental flaws as Secure Communities and may actually reduce crime reporting in the community.

"On a local level, people who have been victims of crime have stopped reporting because they know that any contact with law enforcement would result in their own deportation," he said.

On Tuesday, ICE statement said federal officials had been implementing Cross Check since December 2009 in 37 states, iresulting in 2,064 arrests of convicted criminals, fugitives and undocumented immigrants who have re-entered the country illegally.

The national debate on immigration policy has heated up since Arizona last year passed a law requiring noncitizens to have registration documents on hand at all times. Though key provisions of that law have been tied up in the courts, other states, such as Georgia and Alabama, have followed suit with similar legislation cracking down on illegal immigrants.

Meanwhile, a handful of states have rebuffed federal officials' plans to clamp down on undocumented immigrants.

Earlier this month, New York Gov. Andrew Cuomo sent a letter to the U.S. Department of Homeland Security saying that he would suspend his state's participation in Secure Communities due to "its impact on families, immigrant communities and law enforcement in New York."

"The heart of concern is that the program, conceived of as a method of targeting those who pose the greatest threat in our communities, is in fact having the opposite effect and compromising pubic safety by deterring witnesses to crime and others from working with law enforcement," he wrote.

"Until the numerous questions and controversies regarding the program can be resolved, we have determined that New York is best served by relying on existing tools to ensure the safety of its residents," he added.

Cuomo's move was preceded by Illinois Gov. Pat Quinn, who last month said his state was withdrawing from the program. Massachusetts also rejected it.