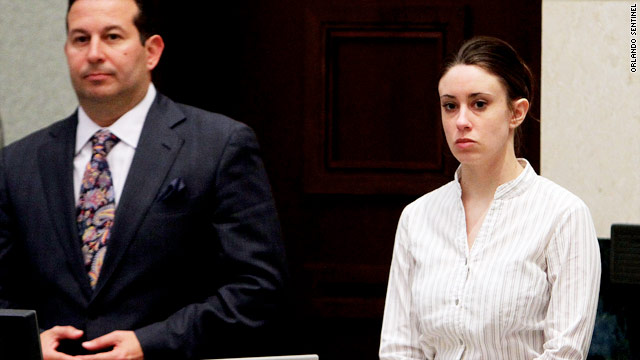 Orlando (CNN) -- Duct tape found on Caylee Anthony's skull was placed there after the toddler's body had decomposed, not before she died, a forensic pathologist testified Saturday as the murder trial of the girl's mother ended its fourth week on a contentious note.

Prosecutors claim Caylee's mother, Casey Anthony, used chloroform to make her daughter unconscious then used duct tape to cover her nose and mouth, suffocating her. The girl's skeletal remains were found in a wooded field six months after her family last reported seeing her.

Dr. Werner Spitz said he believes the tape was placed on the body long after the flesh had disappeared to hold the jaw bone on, perhaps because someone wanted to move it.

Spitz also criticized the Orange County medical examiner, Dr. Jan Garavaglia, for conducting what he termed a "shoddy autopsy" by failing to cut Caylee's skull open to look inside.

Forensic anthropologist William Rodriguez told Judge Belvin Perry after the jury had been excused that he was preparing to testify that no conclusions can be drawn from duct tape found near the girl's body because of decomposition and movement of the bones by animals.

Rodriguez also said he planned to testify that a video prepared by a prosecution expert superimposing Caylee's living face with a picture of her skull and the outline of a piece of duct tape was an "unheard of" application of technology meant only to provide initial identifications of remains.

But Rodriguez' opinions were not contained in his report filed with the court, and weren't shared with prosecutors. That violated Perry's rule that all expert testimony be shared with opposing attorneys, Perry said.

"It appears to me that this was quite intentional," Perry said to Baez. "This was not some inadvertent slip."

He ordered Rodriguez off the stand, but said he will be allowed to testify on Monday, after prosecutors have a chance to interview him. Perry said the law would appear to authorize him the right to exclude the testimony, but said that would be too drastic a step.

"It would be totally unfair to Ms. Anthony to have his testimony excluded on this critical issue," he said.

But he said he would be watching Baez' conduct closely and will consider contempt proceedings at the end of the trial.

"I am not making any promises or warranties about what I will do if it happens a second time with this witness," Perry scolded Baez.

Rodriguez and Spitz are part of the defense effort to discredit, among other things, a prosecution theory that duct tape found clinging to the girl's remains may have been the murder weapon. Duct tape similar to that found with Caylee's body was located on a gas can from the Anthony home that Casey Anthony took from a storage shed during her daughter's disappearance, according to earlier testimony in the case.

What are Casey Anthony jurors thinking?

Spitz began his testimony challenging the thoroughness of the autopsy performed on Anthony, saying examining the inside of the skull is standard practice.

He testified that dried sediment he found indicated the body had decomposed on its left side, with the face pointing slightly up. That differs from evidence at the scene indicating the skull was upright when it was discovered.

Spitz said the lack of DNA found on the tape would suggest it was placed on the girl's skull by someone who wanted to move it for some reason. The tape, he said, was intended to keep the jawbone from falling off.

On cross-examination, prosecutor Jeff Ashton asked Spitz if the sediment was not "brain dust" but perhaps something that carried into the skull by water while the body lay under water in the flood-prone spot where it was found.

Ashton also questioned Spitz' characterization of Garavaglia's autopsy. He challenged the physician -- who co-wrote a book on forensic investigations -- to cite any specific protocol requiring that a pathologist saw open the skull of a thoroughly decomposed body -- including in his own book.

Spitz said that he could not, but that his long experience and training tells him that failing to look at the inside of body's skull is poor practice.

"The skull, the head, is part of the body, and when you do an autopsy you examine the whole body," he said.

Defense attorneys claim Caylee was not murdered, but that she accidentally drowned in the family pool on June 16, the day she was last seen. They argue that Anthony and her father, George Anthony, panicked and covered up the death.

George Anthony has rejected that scenario in his testimony.

Casey Anthony is charged with seven counts, including first degree murder, in the death of her daughter, whose remains were discovered in a wooded field in December 2008, six months after her last family saw her.

Saturday was the third day of the defense case. The case will enter its fifth week Monday.

In Session's Mayra Cuevas, Ilana Rosenbluth and Michael Christian contributed to this report.