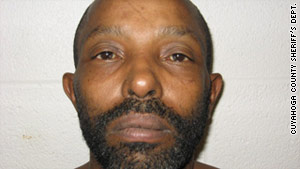 Anthony Sowell faces 85 counts related to the deaths of 11 women between 2007 and 2009.
STORY HIGHLIGHTS

Read more about this story from CNN affiliate WKYC.

(CNN) -- The case against Anthony Sowell is grounded in his Cleveland backyard.

On Monday, jury selection for Sowell's trial begins in Cuyahoga County, Ohio. Sowell faces 85 counts related to his alleged rape, murder and dismembering of the women between 2007 and 2009 -- charges to which he's pleaded not guilty by reason of insanity.

Since the bodies were discovered, other women have come forward alleging that Sowell also attacked them. In April 2010, prosecutors handed down an 10-count indictment against Sowell in connection with the alleged rape of a 34-year-old woman in his Cleveland home.

But those likely to decide Sowell's future have already had their first opportunity to take a measure of the man.

About 200 prospective jurors were introduced to the accused serial killer Friday morning at the Cuyahoga County Common Pleas Court in Cleveland, county court administrator Greg Popovich said. They also met Judge Dick Ambrose, the presiding judge in the case, as well as the defense and prosecution teams.

Dressed in a polo shirt and khaki pants, and unencumbered by handcuffs or shackles (even though he was escorted by six deputies), Sowell addressed the jurors simply by saying, "Hello."

Popovich described the event as "unusual" but necessary to "ensure the integrity of the process in the interest of justice" -- though he didn't elaborate on how it did. Following the meeting, the potential jurors went through an hour-long orientation and then were asked to fill out a 32-page questionnaire.

Should they be tapped for the jury, they will sit through what Popovich estimates will be a six-to-eight week trial documenting the gruesome case against Sowell.

His inconspicuous two-story home sits in a dilapidated neighborhood known as Mount Pleasant, where one in five homes were in foreclosure and at least a third of residents got food stamps, according to a 2010 study by Case Western Reserve University's Center on Urban Poverty and Community Development.

Neighbors and even a city councilman had failed to realize that the stench wafting in the area around Sowell's home was human flesh, not a byproduct of a nearby sausage factory.

In late 2008, Gladys Wade told police that a man in a gray hoodie offered her beer, and when she declined, punched her in the face several times. Wade said that he then tried to rape her, dragging her toward his home, adding that she got out only after "gouging his face."

While the prosecution will press its case against Sowell in the coming weeks, this may not be the end of his story -- even if he is eventually given a death sentence.

Cuyahoga County Prosecutor Bill Mason has said that his cold case unit is reviewing unsolved murders that occurred during the time Sowell lived in Cleveland and East Cleveland to see if there are any connections. Mason said the group is working its way through 75 cases.