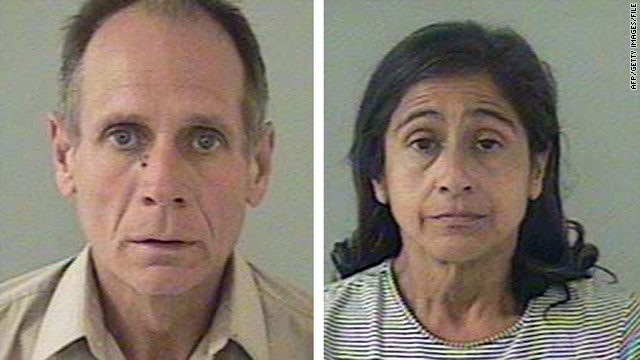 (CNN) -- Phillip Garrido was sentenced Thursday to 431 years to life in prison in the kidnapping and sexual assault of Jaycee Dugard, who was held captive from age 11 to 29 by Garrido and his wife, according to the El Dorado County, California, district attorney's office.

His wife, Nancy Garrido, 55, was sentenced earlier in the day to 36 years to life in prison for her role in the abduction and rape, said Garrido's attorney, Stephen Tapson.

Dugard didn't appear in court Thursday for the sentencings, but she submitted an emotional statement that was presented by her mother, according to Dugard's media representative, Nancy Seltzer.

Jaycee Dugard, now 31, called the Garridos "evil" and described their captivity of her as a "sexual perversion" forced upon her for 18 years.

A statement by Dugard's mother, Terry Probyn, was also read in court.

The Garridos, a married couple, pleaded guilty in late April in El Dorado County Superior Court to charges of kidnapping and sexual assault.

Dugard was abducted from the street in front of her home in South Lake Tahoe, California, in 1991. Authorities found her in 2009. During those years, the Garridos held Dugard in a hidden compound on their home's grounds in Antioch, California. She bore two daughters, fathered by Phillip Garrido.

"I chose not to be here today because I refuse to waste another second of my life in your presence. I've chosen to have my mom read this for me," Dugard wrote.

"Phillip Garrido, you are wrong. I could never say that to you before, but I have the freedom now and I am saying you are a liar and all of your so-called theories are wrong. Everything you have ever done to me has been wrong and someday I hope you can see that.

"What you and Nancy did was reprehensible. You always justified everything to suit yourself but the reality is and always has been that to make someone else suffer for your inability to control yourself and for you, Nancy, to facilitate his behavior and trick young girls for his pleasure is evil. There is no God in the universe that would condone your actions," Dugard said.

"To you, Phillip, I say that I have always been a thing for your own amusement. I hated every second of every day of 18 years because of you and the sexual perversion you forced on me," she continued.

"To you, Nancy, I have nothing to say.

"Both of you can save your apologies and empty words. For all the crimes you have both committed I hope you have as many sleepless nights as I did.

"Yes, as I think of all of those years I am angry because you stole my life and that of my family. Thankfully I am doing well now and no longer live in a nightmare. I have wonderful friends and family around me. Something you can never take from me again. You do not matter any more," Dugard wrote.

In her own statement to the court, Dugard's mother recounted June 10, 1991, the day her daughter was abducted.

"I begged, I pleaded, I cried, I ranted and raved, I went crazy and thought I was going to go insane," Probyn said in her statement. "My baby was gone and all of my dreams turned to nightmares. Dreadful nightmarish thoughts of her bondage and of her suffering.

"For 18 excruciating years, I endured a huge gaping hole in my heart that some evil being had put their hand into and had ripped out. For 18 agonizing years, I guarded what little I had left and lived in hell on this earth," Probyn wrote.

The mother condemned the Garridos.

"I hate you both for the torment and anguish you put my daughter, myself, and my family through. I am nauseous at the thought of the sexual exploitation and the brutal abuse she endured at your uncaring hand. I am sickened by the reality that she had to suffer your cruel and heartless imprisonment for so long. You are the epitome of disgust and no amount of jail time or even death will cleanse your corrupt souls. You do not deserve to live or die or even exist," Probyn's statement said.

"You are nothing...other than selfish, self serving, self gratifying monsters," the mother said. She added that the Garridos will never see Jaycee Dugard's two daughters again.

"Her daughters know what you did to their mother. They realize your backyard was a prison and understand your filthy, despicable secret. They are aware that they have been deceived and I am here to tell you that there is no love lost," the mother's statement to the court said.

Jaycee Dugard's maternal aunt, Tina Dugard, also provided a statement to the court in which she said her mother, Onita, died of "a broken heart" because of Jaycee Dugard's abduction.

"Jaycee was the center of my mom's world, as only a first grandchild can be. Facing life without her beloved Jaycee was more than my mom could handle. I wish she had found the strength to live for me, for my brothers and sisters, and for her other grandchildren. But she couldn't. Losing Jaycee was simply devastating, and she just couldn't recover," Tina Dugard's statement said.

Phillip Garrido was a registered sex offender on parole at the time of his arrest.

California law doesn't provide for a death penalty for the offenses committed by the Garridos, District Attorney Vern Pierson said in April.

Phillip Garrido, 60, pleaded guilty to one count of kidnapping and 13 counts of sexual assault, Pierson said. He has waived his right to appeal, the district attorney said.

Nancy Garrido, 55, pleaded guilty to one count of kidnapping and one count of rape by force, and to California's "one strike" rape law, Pierson said.

Her sentence is the maximum possible based on the sentencing laws in effect in 1991, he said.