From Mayra Cuevas, In Session 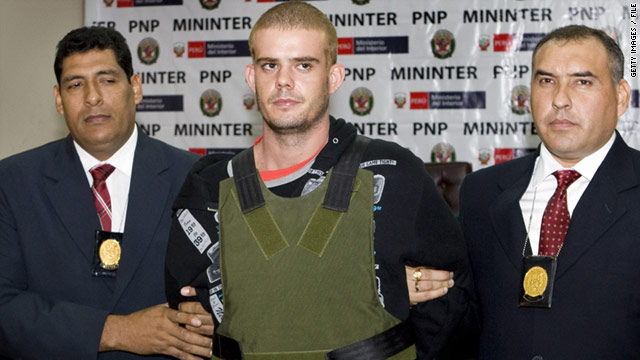 Van der Sloot, the onetime suspect in the 2005 disappearance of Alabama teenager Natalee Holloway, faces a possible trial on first-degree murder and robbery charges in the killing of 21-year-old Stephany Flores. His lawyer, Maximo Altez, filed papers to withdraw from the case Tuesday.

"I cannot defend this case in the way he wants me to," Altez told In Session. He would not elaborate.

Flores was found dead in a Lima hotel room registered to van der Sloot in May 2010. Police say van der Sloot took money and bank cards from her wallet and fled to Chile, where he was arrested a few days later.

Peruvian authorities have yet to file formal charges against van der Sloot, who is expected to appear in court for a preliminary hearing on June 8. Once the discovery phase of the case ends, prosecutors will file charges and a trial date will be set.

Altez has been defending van der Sloot on a pro bono basis and said he expects a public defender will be assigned to the case. He said the lack of payment did not play a role in his decision to quit.

"I thought this case would be a good opportunity to show the world that in Peru detainees are abused, and the Peruvian justice system is very informal," he said. And he said he will continue to represent van der Sloot in a related habeas corpus case claiming human rights violations during his arrest -- a case that would be thrown out if Altez withdrew from that case too.

Altez threatened to quit the case once before after complaining of receiving threats by phone, e-mail and Facebook.

The 23-year-old van der Sloot was once the prime suspect in the disappearance of Holloway, who vanished at age 18 while on a graduation trip to the Caribbean island of Aruba. He was arrested twice but never charged in connection with her disappearance.

Shortly after his 2010 arrest, a federal grand jury in Alabama indicted him on charges that he tried to extort $250,000 from the Holloway family. Van der Sloot offered to provide what turned out to be bogus information about the whereabouts of Natalee Holloway's remains in exchange for the money, according to the charges.