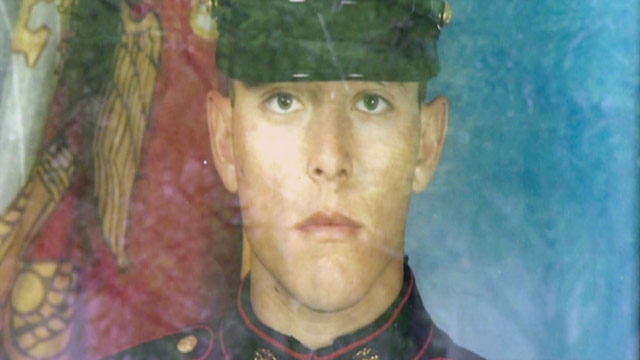 For more on this story, see CNN affiliate KGUN9.com

Tucson, Arizona (CNN) -- A U.S. Marine who died in a flurry of bullets during a drug raid near Tucson never fired on the SWAT team that stormed his house, a report by the Pima County Sheriff's Department shows.

The revelation was contained in an internal investigation released by the department Thursday.

Jose Guerena died May 5 after a SWAT team descended on his home in a Tucson suburb with a search warrant. His home was one of four believed to be associated with a drug smuggling operation in the area.

A video released Thursday by the sheriff's department shows the uniformed SWAT team pulling up outside his house, sounding their sirens, banging on the front door -- before kicking it in -- and opening fire shortly after entering the home.

Officers fired more than 70 shots, the investigation showed. Deputies said they opened fire after Guerena, 26, gestured at them with an AR-15 -- a semiautomatic rifle.

Some of the officers said they believed that Guerena fired on them, but the investigation showed that no shots were fired from the weapon and it was never taken off the safety position.

Initial news reports indicated that he had been struck by more than 60 bullets. However, CNN has seen an initial report from the medical examiner that details 22 bullet wounds.

A lawyer representing the deputies defended their actions.

"They absolutely responded how they were trained. They responded within Arizona laws, within the law throughout the nation," attorney Mike Storie said.

"If you are faced with that type of deadly threat, you're allowed to respond."

Guerena served in Iraq and was discharged from the Marines five years ago. He was working for a mining company in the Tucson area.

But authorities allege he also was involved in drug smuggling, strong-armed robberies and human smuggling.

A search of the home after the shooting revealed nothing illegal, although officers found weapons and body armor.

The five deputies involved in the shooting remain on active duty. No criminal charges have been filed and no disciplinary action taken.

The findings of the investigation are detailed in a five-inch thick report, including a 60-page statement from Guerena's wife, Vanessa, who was in the home at the time of the shooting along with a young son.

In addition to the video, the sheriff's department also released audio of Guerena calling 911 to get medical attention for her husband. Audio of the SWAT team's radio conversations was also included.

She has retained a lawyer, but no legal action has been taken.

"We just learned that the sheriff's department has released voluminous amounts of information in respect to this incident," said Guerena attorney Chris Scileppi. "We will review the documents and CDs, and will make ourselves available for comment in the near future."