Roommate of Rutgers student who committed suicide pleads not guilty 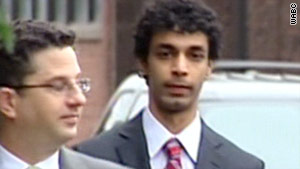 Dharun Ravi, right, is charged with streaming the footage of his roommate, Tyler Clementi, during a sexual encounter.

New York (CNN) -- Defense attorneys entered a not guilty plea Monday for the roommate of the Rutgers University student who committed suicide following a candid online broadcast of his sexual encounter with another man, prosecutors say.

Dharun Ravi, 19, is charged with streaming the footage of his roommate, Tyler Clementi, 18, engaging in a physical relationship with another man in their shared dormitory last September.

According to prosecutors, the video was allegedly accessed from another room and advertised on Twitter, providing "others an opportunity to view the encounter," Middlesex County (New Jersey) Prosecutor Bruce J. Kaplan said in a statement.

Clementi later killed himself, jumping from the George Washington Bridge between New York and New Jersey.

Ravi faces a 15-count indictment of hate crime charges involving invasion of privacy and evidence tampering after prosecutors say he tried to stage a cover-up, deleting the previous Twitter post and replacing it with another intended to mislead investigators as well as asking witnesses not to testify against him. Defense attorney Steve Altman was not immediately available for comment.

A second student charged, Molly Wei, 19, pled not guilty earlier this month in two counts of invasion of privacy. She reached a plea deal agreeing to testify against Ravi, who allegedly set up the room's camera. Should Wei complete a three-year program on cyberbullying and alternate and cultural lifestyles, as well as 300 hours of community services without any additional legal troubles, the invasion of privacy charges for allegedly watching the video will be dropped, the prosecutors office said.

In October, less than a month after Clementi's suicide, President Barack Obama released a taped video message condemning such acts. "You are not alone," the president said. "You did not do anything wrong.

"You didn't do anything to deserve being bullied and there is a whole world waiting for you filled with possibilities," Obama said.

CNN's Jesse Solomon and Nina Raja contributed to this report.