'You Light Up My Life' composer kills self, police say 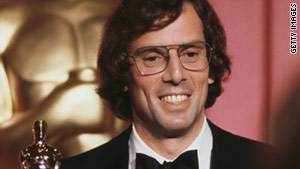 In 1978, Joseph Brooks accepts an Academy Award for best original song for "You Light Up My Life."
STORY HIGHLIGHTS
RELATED TOPICS

(CNN) -- The man who composed the pop hit "You Light Up My Life" ended his own life Sunday, New York police said.

The Oscar-winning songwriter was found dead on a couch in his Manhattan home by a friend with whom he was supposed to have lunch at 12:30 p.m. Sunday, Browne said.

A plastic dry cleaning bag and a towel were wrapped around his head, with a tube connected to a helium tank attached, he said. A suicide note was found nearby, he said.

Brooks' son, Nicholas Brooks, was charged in January with the murder of his ex-girlfriend, according to the Manhattan District Attorney's office.

The song, which was written as the title track for a movie, won an Oscar, a Golden Globe and a Grammy for Brooks.

Debby Boone's recording of "You Light Up My Life" was the number one song of 1977 on the Billboard pop chart.