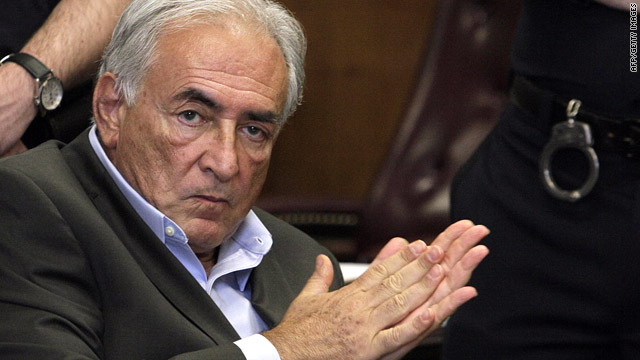 New York (CNN) -- Building management told Manhattan apartment residents that it was not consulted before a leaserholder invited former International Monetary Fund chief Dominique Strauss-Kahn to stay as a guest, according to an e-mail obtained Saturday by CNN.

The general manager for 71 Broadway sent an e-mail informing residents that he has been assured that Strauss-Kahn "will only be staying here until early next week."

Strauss-Kahn, who is awaiting a trial on sexual assault charges, was released on bail from the Rikers Island jail Friday.

A private security guard will monitor Strauss-Kahn around the clock at his own expense during his stay at the Manhattan apartment in the financial district, a source with knowledge of the bail agreement said.

Strauss-Kahn, who is accused of trying to rape a maid last week in his suite at the Sofitel hotel in New York, will stay with his wife, Anne Sinclair.

"We will have an increased staff presence in the building this weekend to ensure that the media, and the curious, are kept out of the building," the general manager wrote. "We apologize for the inconvenience and appreciate your patience."

CNN obtained the e-mail from a resident of the building.

A two-bedroom apartment with 9-foot ceilings in the landmark 23-floor building with a doorman starts at $4,250 per month, according to a real estate website.

The rental application asks, "Do you or do any of your occupants have charges pending against you or against them for any criminal offense(s)?"

In the charge of criminal sexual act in the first degree, Strauss-Kahn is accused of having "engaged in oral sexual conduct with an individual ... by forcible compulsion," an indictment states.

Supreme Court Judge Michael Obus ordered the release of the 62-year-old economist Friday over the objection of the prosecution, which said he is a flight risk.

While Strauss-Kahn is in the apartment, he will not be able to leave except for medical reasons, Obus said. Once he is in a longer-term location, the former banker must give six hours' notice before leaving.

Defense lawyer William Taylor alluded to Strauss-Kahn's reported failure to win approval to stay at another apartment in pleading Friday with members of the news media to grant his client privacy.

"The reason that he had to move is because members of the press attempted to invade his private residence and interfere with his family's privacy," Taylor said.

The conditions of Strauss-Kahn's release included he surrender his travel documents, submit to home detention, $1 million cash bail and $5 million bond. A document signed by bondsman Ira Judelson shows that the bond was secured by money from Sinclair.

Judelson would not divulge what Sinclair put up as collateral.

"I feel very comfortable with the bail package (and) the family is," Judelson told reporters. "I worked with them all last night on putting this together. They're good people."

On Friday, more details emerged about the alleged attack May 14 at the hotel.

A law enforcement source with knowledge of the case said a room service attendant entered the suite shortly before the 32-year-old Guinean maid arrived.

The room service attendant didn't think anyone was in the suite of rooms and used a pass key to let himself in to retrieve some room-service items, the source said. He told police he left the door ajar while inside, according to the source.

When the maid showed up at the door about noon, the room-service attendant told her to enter, then departed, the source said.

Once inside, the maid parked her cleaning cart in the doorway, as dictated by hotel policy. A short time later, Strauss-Kahn emerged naked from a room and attacked her, the victim has alleged.

Prosecutors allege that Strauss-Kahn chased her through his suite, sexually assaulted her and tried to rape her.

A criminal complaint states Strauss-Kahn shut the door at one point during the alleged attack. The law enforcement source said the maid escaped about 1:30 p.m.

About an hour before his 4:40 p.m. flight was to take off from John F. Kennedy International Airport for Paris, Strauss-Kahn called the hotel to say he had left his cell phone. He asked security to look for it in his room and to have it delivered to the airport, the source said.

By then, police had been called to the hotel. Though hotel staff never found the phone, they followed police orders, telling Strauss-Kahn they had found it and would deliver it to him, the source said.

Port Authority police took over from there, walking a compliant Strauss-Kahn from his first-class seat to a squad car at the airport, the source said.

At the time, Strauss-Kahn was in the fourth year of a five-year term with the global financial institution and was paid $441,980 in 2010, according to the most recent annual report. He also got $79,000 and first-class travel for him and his family while he was on company business.

On Friday, the IMF said that Strauss-Kahn, who resigned, will receive a $250,000 separation payment and a "modest annual pension" thereafter.

We don't disclose pension payments," IMF spokesman William Murray said. "But it is well below the separation payment figure."

The dean of the IMF executive board, Shakour Shaalan, announced Friday that the institution adopted a procedure to select its next managing director.

In a statement, Shaalan said the board will meet with final candidates in Washington "with the objective of completing the selection process by June 30, 2011."

Strauss-Kahn proclaimed innocence in a resignation letter to the IMF Executive Board late Wednesday.

"To all, I want to say that I deny with the greatest possible firmness all of the allegations that have been made against me," he said.

His next court appearance is set for June 6.