Police to use billboards in hunt for attackers of Giants fan 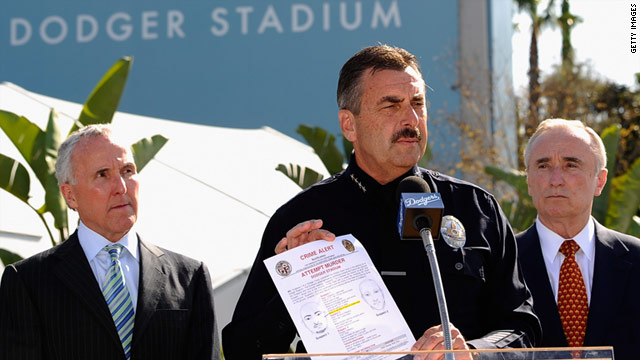 Los Angeles (CNN) -- Los Angeles Police Chief Charlie Beck kicked off Tuesday a billboard campaign in an effort to find the two men suspected of ambushing and beating a San Francisco Giants fan into a coma.

"There are over 300 billboards throughout the Los Angeles area advertising the composites of the assailants of Bryan Stow," Beck told reporters. "This case is one of the top priorities of the Los Angeles Police Department."

Police, including 17 detectives assigned to the case, have been unable to find the two men who attacked Stow, 42, a Giants fan, outside Dodger Stadium in the first week of the Major League Baseball season in March.

Authorities said they were going to make or break the case based on a lead from a tipster.

The billboards use bold red and yellow to advertise "Wanted" and "Attempted Murder at Dodger Stadium" with two composite drawings of the male suspects.

Police will staff an office at Dodger Stadium for another homestand against the Giants on Wednesday and Thursday in case fans have any leads or tips, police said.

The attackers fled in a light-colored sedan driven by a woman with a young boy inside, police said.

He had been taken out of a medically induced coma about a week ago, and has since shown signs of some cognitive function, Dr. Gabriel Zada said, including opening his eyes several times over the past week.

"Eye opening is a sign of higher cognitive function," Zada said, noting that Stow has done so in response to either verbal or physical stimulation.

Stow also has "some movement" in his arms and legs, Zada said.

The doctor cautioned, however, that Stow still has a long road of recovery ahead of him "that will require very intensive medical care."

Still, Stow's condition had stabilized enough to transfer him Monday from Los Angeles County-University of Southern California Medical Center to San Francisco General and Trauma Center, which is closer to his home, Zada said.

Authorities said Stow suffered severe head injuries in an unprovoked beating in a parking lot outside Dodger Stadium after a Dodgers-Giants baseball game, the season opener for both teams.

Two men approached him in the parking lot and began kicking and punching him while yelling profanities about the Giants, police said.

Police released composite sketches of the men, who they said were 18 to 25 years old. Officials are offering a $100,000 reward for information leading to arrests and convictions.

"Sometimes, you catch the criminal right away and sometimes it's just a lot of hard work, chasing down lead after lead," Murphy said.

Stow, a father of two, is a paramedic who traveled from Santa Cruz, California, to make his first-ever visit to Dodgers Stadium. He went to the game with friends in celebration of the Giants' World Series victory last season, a relative said.