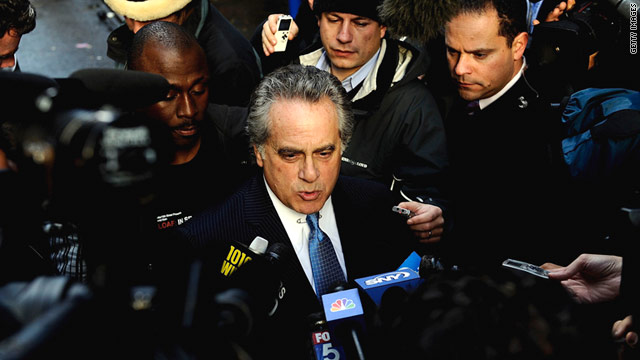 (CNN) -- When New York police detained the head of the International Monetary Fund for questioning on sexual assault charges last weekend, he called on the same lawyer as Michael Jackson, Jay-Z, Sean "Diddy" Combs and other A-listers who faced criminal charges.

The arrest of the 62-year-old Strauss-Kahn, widely considered a leading potential candidate for the French presidency, triggered intense political chatter across the Atlantic. In France, it delivered what the Paris newspaper Le Figaro called a "thunderclap" to the presidential race. And some at the headquarters of Strauss-Kahn's Socialist party were in tears Monday after the news.

The incident has also disrupted the rhythm of the IMF, which assists countries suffering economic difficulties by providing loans. Founded after World War II, the IMF is composed of 187 countries.

Brafman's "skill set" is a "perfect fit" to defend Strauss-Kahn, according Mark Geragos, who who worked with him to defend Jackson on child molestation charges.

"When I read about the case initially, I thought if they wanted the perfect lawyer, they could have genetically programmed Ben and that would have been it," Los Angeles lawyer Mark Geragos said Monday.

"First of all, because of the high profile nature of the case, he's clearly able to navigate the shoals of the media," Geragos said. "Number two, the nature of the accusation is something that Ben has gotten extensive experience successfully defending against. And the political nature of it, Ben would be perfectly attuned to understanding that and all the nuances of that."

Brafman, 62, successfully defended Sean Combs when the hip hop mogul was tried on weapons charges stemming from a shooting at Manhattan night club in 1999.

"He is the best cross-examiner, he's self-deprecating, has a good sense of humor and he thinks outside of the box," Geragos said.

Brafman joked to jurors in Combs trial about his penchant for expensive suits with collar-pinned shirts, Geragos said.

"Ben got up and told the jury, 'I'm trying this with Johnnie Cochran. If your having trouble telling us apart, I'm the guy with the collar pin,'" he said. Brafman is "very adept at knowing how to handle the media," Geragos said.

Brafman, speaking to reporters Sunday, vowed to vigorously defend Strauss-Kahn, who police say chased a hotel employee down the hall of his New York suite and sexually assaulted her the day before.

"This battle has just begun," Brafman he said after Strauss-Kahn's Monday arraignment. "We think this case is very defensible."

Michael Jackson replaced Brafman and Geragos with Tom Mesereau in April 2004, partly because the lawyers did not want to respond through the news media to "every new wrinkle in the case that appears on one of the cable TV shows," Toobin said.

Toobin said at the time that Brafman was the best courtroom lawyer he's ever seen. He renewed the statement Monday, but he added "ultimately the evidence matters more than any lawyer." Jackson was later acquitted without Brafman.

When NFL wide receiver Plaxico Burress accidentally shot himself in his leg with an unregistered gun at a nightclub in 2008, he called Brafman. The resulting plea deal on weapons charges landed Burress in prison for two years. He is set to be released next month.

Brafman defended Jay-Z when he was charged with assault in a 1999 nightclub stabbing. The rapper faced 15 years in prison for a felony assault charge, but got off with three years probation when Brafman negotiated it down to a misdemeanor.

Brafman, who began his career as a Manhattan prosecutor before starting his own law firm in 1980, also represented Mafia boss Vincent "The Chin" Gigante and mobster Sammy "the Bull" Gravano.

"Not everyone who is technically guilty of violating the law is a bad person," Brafman said in an interview published on the education website BabagaNewz.com.

"Many of my clients are good people who have gone astray and broken the law," Brafman told the website. "That doesn't mean their lives should be destroyed. Part of my job is to help them get back on track with their lives."